Give me a museum where homesteaders roam

I didn’t know who he was, but I suspected that he was of British origin because he said “been” as “bean.” Most Americans pronounce “been” as “bin” or “ben.”

He was calling from England. 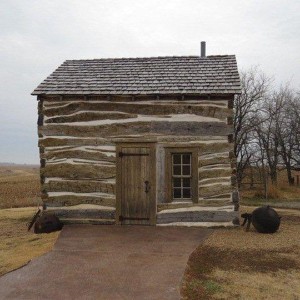 A cabin built by George Palmer in 1867, now at the Homestead National Monument in Beatrice, Neb.

I replied that work had taken me to Beatrice, pronounced “bee-AT-ress,” Neb.

I followed my nonexistent hood ornament to the Homestead National Monument of America located a few miles west of Beatrice. The Heritage Center roof points west and was made to look like a plow cutting sod.

It’s like Babe Ruth’s bat pointing the direction his home run would fly. The Homestead Act of 1862 gave an opportunity to claim free government land. Thousands of people claimed 270 million acres under the act.

The last homesteader was a Vietnam veteran from California named Kenneth Deardorff who filed a homestead claim on 80 acres of land on the Stony River in southwestern Alaska in 1974. The National Homesteading Museum contains farm implements, the Freeman School (a historic one-room schoolhouse used until 1968), and the Palmer-Epard Cabin built in 1867.

George Palmer constructed the cabin from mixed hardwoods. It was lavish in size, measuring 14 by 16 feet, and housed the couple and their 10 children. Every family member had his or her own room. It was the same room.

Family togetherness wasn’t something that needed to be worked at. The Palmers lived there until 1895 when it was sold to their nephews. A few years later, the farm was sold to Lawrence and Ida Epard. The Epards lived in the cabin for 40 years.

I suppose the Paulsons and Epards were clodhoppers. The Oxford English Dictionary defines a clodhopper as “a ploughman or agricultural labourer; a country lout.”

I’ve walked many plowed fields. If you’ve ever done that, you’ve noticed that your shoes quickly gain weight. The large, moist chunks of soil that adhere to footwear are clods turned up by the plow. I was a hopper.

There were various forms of barbed wire displayed there. I tried to identify barbed wire that had claimed bits of my flesh through the years. There were few trees or stones to build fences to contain livestock on the sea of grass that was the prairie.

In “My Antonia,” Willa Cather wrote, “There was nothing but land, not a country at all, but the material out of which countries are made.”

Some houses were made from sod bricks and heated by burning buffalo chips. Homesteaders planted hedgerows, living fences of thorny bushes and trees such as the Osage orange. Most homesteaders allowed their cattle and sheep to graze freely. The open range changed when Michael Kelly invented barbed wire in 1868. There were more than 500 patents for barbed wire issued between 1868 and 1874.

My first bicycle was too big for me. It was built for a Viking defensive tackle. I could hit only one pedal at a time, which made braking an iffy proposition. It didn’t help that it had a steering wheel in place of handlebars.

It was so rusty, I needed a tetanus shot each time I came within 20 feet of the bike.

Too stubborn to ask for help in learning to ride, I’d position the bicycle at the highest point in our driveway, jump on it and hurry down the drive. One day, the front wheel hit a rut and veered off course. I hit the brakes to no avail. I flew from the road and into a barbed wire fence. Then the brakes worked.

It wasn’t the arrow, it was the archer.

To salve that painful memory, I stopped at an ice cream parlor in Le Mars, Iowa, a city that was officially designated the Ice Cream Capital of the World by those who officially designate such things. Actualities didn’t fall short of expectations. It was toothsome ice cream.

Le Mars has been home to Wells Enterprises, makers of Blue Bunny ice cream, since the company’s founding in 1913. The city’s slogan is “Where Life Is Sweet.”