“Everything is nearly copacetic. There is no whining on my yacht. The Crandall train is rolling. I don’t know what I want, but I know I don’t have it. I just used up the last of my Christmas postage stamps. Pop locked his keys in his car. Luckily, he has a keyless entry. A clothes hanger works. Pop drives so slow that pedestrians tailgate him. I’m saving my pennies. What else could I do with them? I have jars of wet pennies stashed all over the house. We had a stump-floater and a gully washer the other day. A right heavy little dew. It rained pitchforks and plow handles. That heavy rain proved that both my roof and my basement leak. My house turned into a two-story swimming pool. I took a few weeks off from combing my hair and shaving. Sometimes I get on my own nerves. Then I remembered that I had to renew my driver’s license. I looked pretty scruffy while standing in front of the camera that would snap my license photo. I told the nice clerk that I probably looked like a water buffalo.” 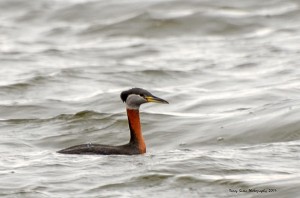 A red-necked grebe swims in the water. – Submitted

“She said, ‘I’ll tell you the truth, if you’ll promise not to charge.’”

Native Americans hung gourds for purple martins before Europeans arrived in North America. The first returning purple martins are often called scouts, but aren’t checking things out for a group. They are older birds returning to areas where they have nested before.

Millie Westland of Hayward told me that the first purple martins returned to her place on April 11. Last year, they came back on April 6. Randy Frederickson of Willmar said that a purple martin showed up on April 14. He fed him crickets. Eight inches of snow fell and the bird was snowed in, as the snow on the porches completely covered the holes of the martin house.

My wife and I were walking on a trail near Weslaco, Texas, when we spotted a Texas indigo snake. The blue-black snake stretched the width of the trail, so it must have been 6 feet long. It was a beauty. Some grow even longer, up to 8 feet. Indigos eat almost anything they could swallow, including adult rattlesnakes. My wife likes snakes — to stay the heck away from her. Ophidiophobia is the fear of snakes. It’s a common ailment. One that I’m thankful I don’t have.

I spoke at the Clear Lake Public Library. I love libraries. They are Imagination & Information, Incorporated. A woman there told me that on her visit to Oklahoma, she asked a landowner what kind of birds he had there. The man replied, “We have red birds, blue birds, yellow birds and wire birds.”

The wire birds were scissor-tailed flycatchers.

Steve Eno of Raymond, Neb., loves bluebirds and because of the good things he’s done on behalf of bluebirds, I’m sure the bluebirds love Steve Eno. Steve runs an extensive bluebird trail and encourages and educates others to run bluebird trails. He works with Bluebirds Across Nebraska to make the world a better place for bluebirds. He walked Connie Conover of Lincoln down a trail, checking bluebird boxes, and hoping that Connie might start his own bluebird trail. Connie didn’t enjoy walking the trail. It wasn’t his thing. He asked if there was anything else he could do to help bluebirds. Steve told him there was. Connie Conover never fledged a single bluebird, but he built over 26,000 bluebird nest boxes before he shuffled off this mortal coil.

Charlie Kermes of Hayward asked why woodpeckers drum. Drumming is the term given to a woodpecker’s habit of hammering loudly and rapidly on some resonating surface such as a dead tree, metal sign, chimney or building. Woodpeckers don’t have a song as do passerines; drumming serves as a territorial advertisement and may also serve to attract a mate.

Michael Bonner of Courtland told me that a hairy woodpecker in his yard tried a number of different signs before settling upon one with just the right sound quality and volume to suit its needs.

Vernell Miller of Freeborn asked if cardinals become redder in the spring. They do, but it isn’t because of a molt. The gray tips and edges of the feathers wear away due to abrasion and reveal the red color of the feathers underneath. This showcases the redbird’s springtime crimson.

“What is the wingspan of a trumpeter swan?” According to the Trumpeter Swan Society, its wingspan is 7 to 8 feet, but some are less.

“What do red-headed woodpeckers eat?” They are omnivores, so their diet is varied. They enjoy grasshoppers, cicadas, corn, berries, fruits, acorns and other nuts, and slow-flying insects such as moths and beetles. They will cache food.

“How many hummingbird species are there?” Scientists don’t agree on the number, but it’s likely 328 to 338 found only in the Americas. Seventeen species breed in North America.

Extrafloral nectaries, nectar-producing glands physically apart from the flower, have been identified in more than 2000 plant species. These glands may be on leaves, petioles, bracts, fruits, etc. and their size, shape, and secretions vary. Ants often use them.

Elizabeth Dumont of the University of Massachusetts Amherst published a bone density study and concluded that bird skeletons don’t weigh less than the skeletons of similarly sized mammals.

Bamboo can grow up to 35 inches in a day.

“Be grateful for luck. Pay the thunder no mind — listen to the birds. And don’t hate nobody.” — Eubie Blake

“The more you find out about the world, the more opportunities there are to laugh at it.” — Bill Nye