The funeral service will be later this summer at First Baptist Church in Clarks Grove. 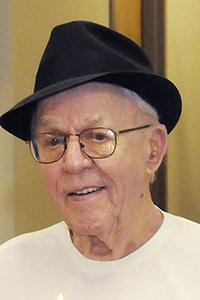 B.C. was born in Clarks Grove to Winifred and William Fynbo on Nov. 20, 1924. He was the youngest of four children. He graduated from Ellendale High School in Ellendale. B.C. was married to Barbara Marshall on Sept. 25, 1948. They later divorced after 26 years of marriage but in the end grew to be close friends.

B.C. worked for Hormel for eight months after high school and then enlisted in the Air Force in March of 1943 during World War II. He flew 39 missions over Germany. He was awarded the World War II European Theater of Operations Ribbon with four major battle stars. He also received the Air Medal with four oak leaf clusters. He was in the Eighth Air Force in a B24 Liberator. He was a crew member radio operator and gunner.  He was honorably discharged in 1945.

Upon discharge, B.C. worked for Skinner-Chamberlain Department Store in Albert Lea as the assistant manager of the main floor. It was there that he met Barbara Marshall. They married and had six children.

In 1951 B.C. started farming in Clarks Grove and continued that for 17 years until a tornado destroyed their farm. B.C. then leased and managed a Skelly gas station in Ellendale for a few years before going to work for Gordon Electric in Albert Lea, where he was a sales manager. In 1978 B.C. started his own business, Fynbo Appliance & Waterbed Gallery, in Albert Lea.

B.C.’s real passion was buying and selling used cars, which he did for many years after retiring from his business. Buicks were his favorite. In his younger days, B.C. enjoyed flying his own plane. A highlight was flying his Cessna 150 over the Grand Canyon.

B.C. is preceded in death by his son, Bruce Clark Fynbo; his parents, Winifred and William Fynbo; his siblings Marge Lerberg, Gene Fynbo and Riley Fynbo; and a special friend, Char Miller.