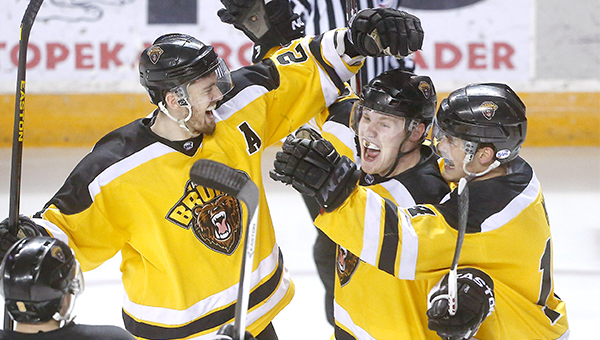 The Austin Bruins celebrate after Brian Bachnak gives them a 2-0 lead over Topeka early in the second period during last Saturday night’s game at the Kansas Expocentre. — Chris Neal/The Capital-Journal

The Austin Bruins have been on a roller coaster ride this postseason, and it’s about to get even wilder.

Austin will play in the Robertson Cup Finals on Friday, Saturday and possibly Sunday in a three-game series at Fairbanks, Ala., to take on the Ice Dogs. Friday and Saturday’s games will start at 10:30 p.m. Central time and Sunday’s game would start at 8 p.m. Central time.

Austin’s trip to its first Robertson Cup finals in its four-year franchise history has been anything but routine. Of the 12 postseason games the Bruins have played in, four of them went to overtime and 11 of them were decided by two goals or less.

The Bruins played in the longest game in NAHL history against Minot. After that series ended, they found out they’d have to go the rest of the way without Guillaume Leclerc, the all NAHL rookie who had 21 goals and 25 assists this past season. Leclerc, a UMass-Lowell commit, had to leave the team due to a family emergency and won’t be back this weekend. Although Leclerc hasn’t been on the ice, he hasn’t been forgotten.

Fellow Bruins rookie Brian Bachnak, who has stepped up in Leclerc’s absence, speaks to Leclerc on a daily basis and said the team has rallied around winning the Cup for Leclerc.

“(Losing Leclerc) took a lot of life out of us, but we said family first and we’re going to keep playing,” Bachnak said. “Not only is (Leclerc) one of the top scorers on the team, but in the locker room and off the ice he brings so much energy. He’s always happy, and he’s always having fun. He goes out to practice about 30 minutes early every day working hard, and he makes you want to work harder and play harder.”