“Everything is nearly copacetic. I’m still fogging up the mirror. I feel finer than a frog’s hair sanded twice. I’ve been hanging around Still Bill. If laziness were dirt, he’d cover a couple of acres. If all it takes to be a success is a little ambition, Still Bill should be a great success. He has as little ambition as anyone. That always makes me feel like I have more ambition than anyone in the world. I’m never lost when I’m around Still Bill. The moss grows on his north side. He isn’t much of a talker, but he’s always ready to mumble. Still Bill could have gotten a college football scholarship, but he couldn’t find the school. But armed with a knife and fork, he is a trencherman without equal. His father retired without ever having worked. When my father retired, his bedtime became three hours after he falls asleep on the couch. He can never remember a face, but he always forgets a name. He doesn’t mind being called a senior as long as it comes with a 10 percent discount and he considers tied shoes to be formal attire.” 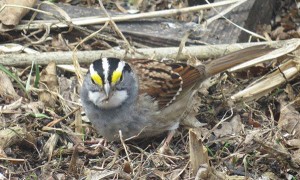 May is when we go from having the least amount of deer we will have during the year to having the most.

I watched a Cooper’s hawk harass a flying turkey vulture with a loud “kek, kek, kek.” A friend was upset because a Cooper’s hawk had taken a songbird from the feeder in his yard. I tried to calm him by telling him that it was a birdfeeder, after all.

Birding in a hospice

Kirsten Strnad of Faribault told me that while her late husband, Forest, was in the Homestead Hospice House in Owatonna, he identified 21 species of birds from the window, including an orchard oriole. His excitement about seeing the birds was so great that it caused a number of the other residents to take up birding.

Not likely to become a new cooking show

Shari Hopp of Unadilla, Neb., was being driven to distraction by the squirrels’ assault upon the bird feeder near the kitchen window of the house she shares with her husband, Gordon. One day, Shari was busy whipping up some delicacies when she saw another squirrel on the feeder. She opened the window to yell but did something else. She had a pair of tongs in her hand and she grabbed the squirrel with them. It was an instinctive move.

The squirrel escaped, but he had quite a story to tell.

Mike Shaul of New Ulm told me that he’d built a solar air-heating collector. Easy and cheap to build, it offers a quick payback on the cost of the materials. It’s a huge saving over equivalent commercially-made collectors. The collector uses columns of aluminum soda beverage cans with the ends cut out. The sun shines on the cans, which had been painted black, heating them. The air flowing through the inside of the can columns picks up the heat and delivers it to the room.

“What is the fear of birds called?” Some would call it idiotic, but not me. And it’s not birdaphobia. Ornithophobia is an abnormal, irrational fear of birds.

“How many monarch butterfly eggs become adults?” Monarch eggs and larvae have slim chances. Studies have documented mortality rates of over 90 percent during the egg and larva stages.

“When do turtles lay eggs? June is the big month for turtle eggs. The nesting period is typically from late May into July.

“How many times will a robin use the same nest?” Usually just once, but she might build a new floor for that nest to raise another brood.

“What is the easiest way to get butterflies in my yard?” Raise cabbage. One of the most common butterflies seen flying around yards is the cabbage white. This white butterfly uses a variety of larval host plants from garden vegetables such as broccoli, cauliflower, and cabbage to weeds such as garlic mustard. Cabbage suffers in its presence.

“My grandfather is fond of saying ‘I haven’t seen you in a coon’s age.’ How long is that?” The average raccoon lives two to five years if it is a nonsmoker.

Doug Bushlack of New Richland asks how to discourage grackles at the feeders. Don’t use tray or platform feeders that allow grackles to land. Tube feeders surrounded by cages work. They let small birds enter but not larger birds. There are feeders with adjustable, weight-activated perches that close when a heavier bird, like a grackle, lands on it. Feeders can be made unappealing by shortening or removing perches. Reduce the amount of seed that birds throw out by replacing seed mixes with black-oil sunflower or hulled sunflower seed. Use safflower. Grackles eat many kinds of seed, but safflower isn’t on their preferred list.

“What is a tree fox?” It’s a nickname for the gray fox, a mammal capable of climbing trees.

“Do deer whistles on cars work?” They do not. Whistling deer don’t work either. The deer whistles do nothing more to alert deer than the sounds of the vehicle aren’t already doing.

“Are squirrel nests high in the trees indicative of a harsh winter?” There is no correlation between the location of spherical dreys built by the squirrels and winter’s severity.

As soon as the snow goes and there is a bit of warmth, ticks appear.

A bluebird chick can fly 300 feet when fledging from a nest box. That’s the length of a football field.

“Could a greater miracle take place than for us to look through each other’s eyes for an instant?” — Henry David Thoreau

“I’ve made up my mind, but I made it up both ways.” — Casey Stengel