“Everything is nearly copacetic. I’m keeping my tires on the tar. My car is running better since I put the ‘I drive like this just to irritate you.’ I got a new toaster. I’m keeping my old one in case I ever need an old toaster that doesn’t work. I stopped at Conan the Barber’s to replenish my wisdom and try to guess whose ear is lying on the floor. I’m surprised he’s doing so well in business. When we were young punks, he’d travel only at night because his thumbs were prone to sunburn. He worked construction while in barber school. He saw a job posting. It read, ‘Handyman wanted.’ The foreman asked if he could drive a skid loader. Conan couldn’t. The foreman asked if he could plaster. Conan couldn’t. The foreman asked if he’d ever done any carpentry. Conan hadn’t. The foreman, frustrated, said, ‘What’s handy about you?’ Conan replied, “I live only five minutes from here.’ I can’t wait for the lake to warm up so I can go swimming. I’m thankful Pop taught me to swim. He rowed out into the middle of St. Olaf Lake and tossed me from the boat. That wasn’t the hard part. The hard part was getting out of burlap bag.” 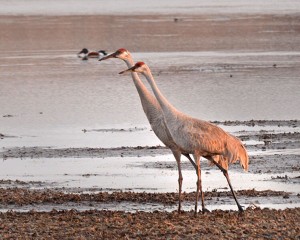 Oodles of orioles and a gross of grosbeaks flocked to my feeders. Greedy beaks consumed food. Migrating at night, they are cold, tired and hungry upon arrival. Baltimore orioles feed mostly on the nectar of tree flowers until the caterpillar and insect populations grow. They like fruit and nectar, so they can be attracted with orange halves, grape jelly and sugar water in oriole or hummingbird feeders. They also will eat mealworms, suet and nuts.

A friend was in his eighties. He was a rare bird, one that was always a delight to see. He maintained a number of wood duck boxes that required a long ladder to get to the boxes. One day, he was out checking the wood duck boxes. He lost his balance and fell from the ladder. Other than minor bruises and a dented ego, there were no injuries. His kids took his ladder away.

Towering pines make it difficult not to be humble.

I took my camera for a walk and photographed a migrating bufflehead swimming about. A knucklehead watching a bufflehead seemed appropriate. Buffleheads breed near ponds and lakes in boreal forests and aspen parklands of Canada and Alaska, with isolated populations in the U.S. The bufflehead’s breeding range is limited by the distribution of northern flickers, which are their main provider of nesting cavities. Buffleheads are North America’s smallest diving duck and the old flicker nests are too small for goldeneyes, wood ducks and mergansers.

A good friend, Bill Bryson, of Alden was inducted into the Minnesota Waterfowl Association Class of 2014 Hall of Fame at their February annual banquet. Tom Tubbs presented the award.

“Will yellow-bellied sapsuckers kill trees?” Yellow-bellied sapsuckers drill in many species of trees, but have a strong preference for birches and maples. As their name indicates, sapsuckers rely on sap as a main food source. Just as people tap maple trees to make maple syrup, sapsuckers drill wells in spring. The birds first drill narrow, circular wells into the tree’s xylem, the inner part of the trunk, to feed on the sap moving up to the branches in early spring. Then, after the trees leaf out, the sapsucker drills shallower, rectangular holes in the phloem, the part of the trunk carrying sap down from the leaves. The phloem wells must be continually maintained with fresh drilling, so that the sap would continue to flow. The sap wells attract hummingbirds, which also feed on the sap flowing from the tree. In addition to sap, yellow-bellied sapsuckers also eat insects, spiders and fruit. The shallow damage shouldn’t cause serious problems to a healthy tree. If you are concerned about a persistent sapsucker causing injury to a tree, wrap hardware cloth around the affected area.

“Why are robins’ eggs blue?” Maybe blue is more difficult for predators to see than a white colored egg. Or a brood of blue eggs might make it easier for the mother to spot an egg that doesn’t belong, like that of a parasitic-nesting cowbird. It’s a mystery.  A good number of other birds have blue eggs.

“Where do sandhill cranes nest?” The three subpopulations of sandhill cranes are migratory. The lesser, greater and Canadian sandhill cranes spend winters in the south and summers at their breeding grounds. The largest congregation of migrating sandhill cranes occurs from February to early April along the Platte River in Nebraska. Some breed in Minnesota, Wisconsin, Michigan, Oregon, Idaho, Alaska, Canada and Siberia.

The bite of a tarantula is typically no worse than that of a wasp or a bee.

Centipedes are distinguished from millipedes in having one, not two, pair of legs attached to each segment.

A plague of locusts swept across the American west in the summer of 1875. The size of that swarm was estimated at 198,000 square miles-bigger than California.

Bergmann’s Rule states that a species is larger in size in colder environments and smaller in size in warmer regions.

A group of waxwings is collectively known as an “earful” or a “museum.”

In golf, a score of three under par on a hole, one less stroke than an eagle, is called an albatross.

“We abuse land because we regard it as a commodity belonging to us. When we see land as a community to which we belong, we may begin to use it with love and respect.” — Aldo Leopold