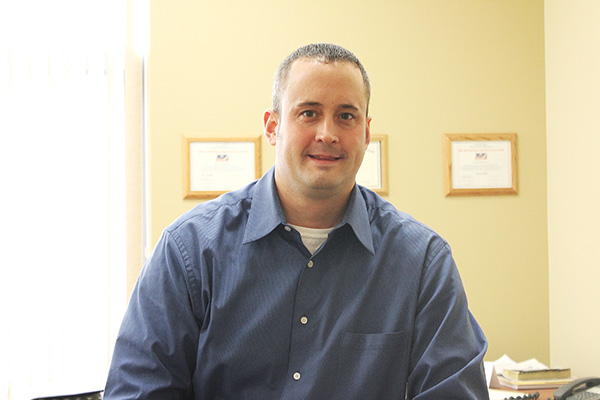 Nolander took over as director last August when Dan Dorman left for a St. Paul lobbying firm and has since worked to keep business strong in Albert Lea.

ALEDA consists of two separate agencies, the Albert Lea Port Authority and Greater Jobs Inc. ALEDA serves as a mechanism where the city and the private sector work together for economic development in the area.

Nolander said he is looking to bring new business to the area, though it is like chasing after a shiny penny.

“We all want the shiny penny, but it is important to maintain area businesses,” Nolander said.

He said the majority of growth in a community comes from existing businesses.

With that strategy, Nolander talks to area businesses about ways he can help to solve problems. One recent victory was helping a company hire a new employee to do work that was being outsourced.

He said any economic growth in Austin, Owatonna or any area town is a victory for Albert Lea.

“I figure we are all in the same boat. We might as well be each other’s cheerleaders,” Nolander said.

He remains optimistic about bringing business to Albert Lea and said Albert Lea is often one of the last contenders in the running when companies are looking to set up their business.

Nolander said the biggest concern for Albert Lea is a lack of workforce.

“With many baby boomers looking to retire in the next few years, we don’t have the workforce we once had,” Nolander said.

He said companies looking to set up shop have asked him only workforce-related questions.

To optimize the workforce, Nolander has worked with schools and businesses to create opportunities for local students.

He said many students he talks to are looking move away after graduation, an idea he once had himself.

Nolander, who grew up in Albert Lea, returned to town after college because of a job offer. He took the position of assistant director for ALEDA in 2005 and has enjoyed working with area businesses.

“The opportunity costs are cheaper and we have an excellent work ethic,” Nolander said of doing business in Albert Lea.

“It is nice just being able to walk to the park after work or go to the lake,” Nolander said. “It is a nice, safe community.”