Nothing warms the soul like a fire in a cabin

I have to believe that we finally turned the corner and are actually headed into the summer season. Having survived a long winter of cold and snow, I am actually excited to see what summer has in store.

I began filling the bird feeders early on in the spring, and it has brought some good results, bringing numerous birds to the feeders this year. Surprisingly enough, there have been very few blackbirds around to torment me. I guess that the blackbirds and starlings are the Rodney Dangerfields of the bird world because they get no respect — at least not from me. 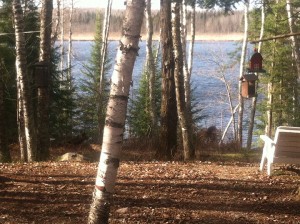 Bird feeders hang from the trees by Boggy Lake on the day after the opener. — Dick Herfindahl/Albert Lea Tribune

While I was up north a couple of weeks ago, I had time to reflect on the wonders and beauty of nature and the wildlife that nature has blessed us with. Observing ducks, geese, loons, deer and other such critters in their natural habitat gives me that feeling that I am actually closer to nature. Now there is something about watching mallards walking down my sidewalk or sitting atop the neighbor’s roof that just doesn’t quite do it for me. The same can be said for Canadian geese walking down the sidewalk at Frank Hall Park. It just doesn’t quite give me that same feeling. Now, if I drove a few miles to, say, Pickerel Lake and observed the same critters it would seem pristine and all back to nature-like. It’s funny how the same birds or animals put in a different environment can change a person’s perspective. Just a thought.

When I attended the Governor’s Fishing Opener in the Brainerd-Nisswa area a few weeks ago, I was reminded of my days as a youth when I yearned to head north for a week; or in my fantasy it would be for a few weeks or more to bask in the beauty of the north woods. Today, the area has changed some with many more opportunities to shop and dine, but the beauty of the area has not changed.

Looking back at the many folks that I used to look to for fishing tips — whether it was magazine articles or fishing shows — most of them seemed to originate from this area of the state. When traveling north with my grandson Dylan, he would occasionally ask me if we were in the middle of nowhere yet. Well, this area may not be in the middle of nowhere, but whenever I was there or even just passing through, it always symbolized up north to me. This has not changed because there are so many lakes and much forest land to accommodate any wants that a visitor to the area may desire.

When I look back at opening weekend and the few days following, I am grateful for the weather that we had on opening day. The weather on opening day was almost perfect; except for the fish who seemed to have a severe case of lockjaw. On Sunday, I headed north to the cabin to see if it had survived the winter in one piece. To my surprise, there were no trees down — at least not blocking the driveway — and everything seemed to be in order. At the end of the season, we usually take home anything that may freeze over the winter so spring involves re-stocking the cabin with canned goods and other miscellaneous things we may need for the summer.

Once at the cabin, I unloaded the truck and filled the bird feeders even before I began putting things away. This is usually one of the first things that I do because it can sometimes take a day or two for the birds to discover the food. This time, however, they came almost immediately and wasted no time putting on the feed bag.

The weather on Sunday was ideal, and I was able to sit back and watch as the birds literally flocked to the feeders. Once Sunday turned into night, things changed. I awoke to cold temperatures and a steady rain with a few snowflakes thrown in, which persisted for the whole day and most of the next. My main goal for the next couple of days was to make sure that I had enough dry wood to keep the cabin nice and toasty, which I did. I have to say that our little wood stove keeps our cozy little cabin nice and comfortable.

If you have ever tented in weather like that, you know that it is almost impossible to stay dry and warm when the weather stays damp and cold. Ahh… those were the days. Looking back, those were actually some very good times. But, alas, the resilience of youth has long since been replaced by creaking joints, aching muscles and an appreciation for the warmth of a dry cabin with a warm fire.

A lot of folks have wondered what the reasoning was behind the Department of Natural Resources not opening up Albert Lea Lake, and some others area lakes that had winter kill. After speaking to a top DNR official at the opener, he said that they have taken a more cautious approach to that issue because many lakes that had winter kill still have fish that survived. This year, he said that the DNR only allowed promiscuous fishing on seven lakes in the state. He said the reason for that change was that people would report lakes as freezing out, when in reality there was some fish kill but not enough to kill off the lake.

Until next time, any time is a great time to enjoy a little fishing on one of our area lakes, but no matter when or where you plan to fish be safe and if you’re in a boat be sure to wear your life jacket.

Have a safe Memorial Day and please remember those who served and those who gave the ultimate sacrifice so that we are able to enjoy all the freedoms that we have today.