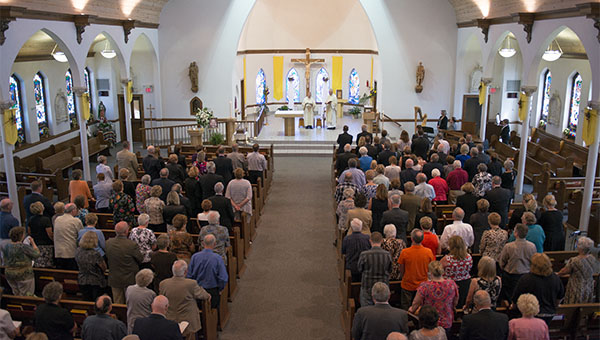 At least 200 people gathered Friday at St. Theodore Catholic Church to pay their respects to a man who was known not only as a long-term public servant but also a loving family man.

Paul Sparks, 69, died Tuesday surrounded by his family after a battle with cancer.

Though he was known to many for his role as Albert Lea city manager for 27 years, he was also remembered during the church service for his faith and his role as a mentor.

Parked outside the church during the service was an Albert Lea fire truck, dump truck and police car.

“Paul has had such an impact on my life, and he has made me who I am today,” said Freeborn County Engineer Sue Miller, who started out working with Sparks in city government.

Sparks and his first wife, Judith, moved to Albert Lea in 1978, when he started as city manager. He worked there until 2004 and became executive director of the Albert Lea Economic Development Agency until 2007.

In addition, he was active in many state and local boards. Recently, he served as chairman of the Freeborn County Communities Foundation and was a key part of the effort to get the Albert Lea Art Center into the Freeborn National Bank building.

“He was the heart and soul of this transition that we’re going through,” said Marty Shepard of the Albert Lea Art Center. “He has everything to do with us getting into that building.”

“He was a determined man,” Rasmussen said. “He believed more in Albert Lea, not only for a job, but personally, and it was great satisfaction for him to see Albert Lea succeed.”

Rasmussen called his death a “loss for the community.”

City Engineer Steven Jahnke said Sparks was the city manager when he was hired as engineer.

“He always had the best interest of the city when he was doing his job, and he treated his employees well,” Jahnke said.

Former state Rep. Dan Dorman, executive director of the Greater Minnesota Partnership, is a former leader of the Albert Lea Economic Development Agency and said he worked closely with Sparks.

He credited Sparks with bringing businesses such as Albert Lea Select Foods and Larson Manufacturing to town.

Dorman said he had a “tremendous amount” of respect for Sparks, and said he found Sparks was always willing to help him.

“He was a good mentor, and I am proud to know him,” Dorman said.

The Rev. Tim Reker of St. Theodore Catholic Church said Sparks embraced an attitude of stewardship as a way of life.

“His legacy will live on in various ways,” said Reker, who described him as an active parishioner. “Paul recognized that every good gift comes from God.”

Miller said Sparks had a “strength and conviction for the city,” but his greatest love was his family.

She said she introduced Sparks to his second wife, Camilla, and ironically he introduced her to her husband, Joe Grossman.

Sparks had one daughter, four stepsons and six grandchildren. 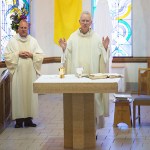 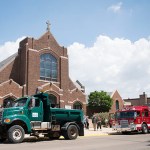 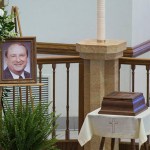 A portrait of Paul Sparks sits next to his remains during his memorial service in June at St. Theodore Catholic Church in Albert Lea. – Colleen Harrison/ Albert Lea Tribune 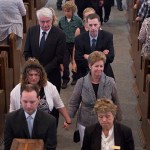 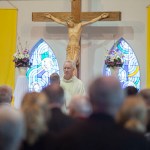