European expedition was filled with fooood

My hat hadn’t hung from the same nail often.

I had been traveling incessantly, on a perpetual peregrination.

My “I love baggage handlers” sticker on my suitcase didn’t work as I’d hoped it would. It had been ripped and bent. The handle no longer worked. But I wasn’t unhappy. I’d made it to my destination. I was in Frankfurt, Germany. 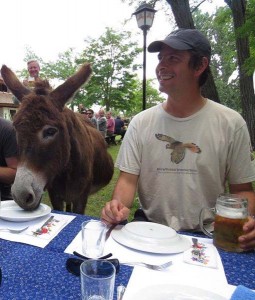 A donkey washes dishes at a restaurant in Hungary.

I was thrilled to be working in Germany, Austria and Hungary.

My grandfather moved from Hamburg, Germany to Iowa when he was a young fellow. In his honor, whenever the hole in my head moved to my stomach, I made time to eat good German foods as strudel covered in cream and sausage. Sausage consists of meat, cut into pieces or ground, stuffed into casings. Other ingredients may include seasonings, spices and fillers. The meat could be from any animal, such as pork, beef or raccoon.

My employer was generous in offering food. I never ate on an empty stomach.

I sat in the Vienna airport on seats stripped of comfort. There was no padding on the seats and little on mine. It was bone on metal. In Vienna, I found a statue of Haydn. Surprisingly, it was in plain sight.

Matchbooks carrying advertising were common in hotels and restaurants, as were cigarette smokers. There was likely a correlation.

I said, “Danke shon” often. It’s German for something like “thank you very much.” I wonder what they said before Wayne Newton sang the song?

I encountered a couple from the United States at a national park in Hungary. They were muttering about their displeasure at a shopping experience in Germany.

“No one there spoke English,” growled one.

“How dare they not speak English?” I thought to myself.

I wanted to say, “Just wait until they come to Minnesota on a shopping trip and try to order something in German. Then we’ll get even.”

Why anyone expects the world to talk like him or act like him is one of the great mysteries.

I imagined the shop’s owner saying, “There are only two things I hate — intolerance and people from the United States.”

The food was great in Hungary. I definitely did not go hungry in Hungary.

There was a lot of wildlife in Hungary, and the drivers moved fast. Collisions happened between the two. That’s how they make goulash.

I enjoyed eating Hungarian goulash at an outdoor table. It was great, and the dessert was even better. It was crepes in a plum sauce. Donkeys roamed from table to table. I wasn’t sure why they were there. The server asked us to not give any beer to a particular donkey because it was pregnant.

I doubt that the thought of sharing a beer with a donkey had occurred to anyone. The crepes were incredible, but of a bit more quantity than the humans could consume. Any of crepes that weren’t devoured by the customers, were quickly eaten by a donkey. The donkeys licked the plates clean.

It was then that I realized that the amazing crepes-eating donkeys were employed by the restaurant. They were the dishwashers.

In a Budapest convenience store, I discovered that it cost 50 cents to use the bathroom. A woman, talking on a cellphone, took my money and ushered me through a turnstile to the restroom. Another employee of the store apparently had the job of standing outside and staring earnestly at motorists filling cars with gas and cleaning windshields.

I spent a short time in Amsterdam, claimed to be the most liberal city in the world. I noticed that many of the
urinals there had lifelike flies painted on the basins. This was after I’d traveled miles and miles of kilometers. In my state of semi-consciousness brought about by constant travel and lack of sleep, the sight of the flies made me as happy as Larry.

I made it home thanks to traveling mercies.

There was a seven-hour difference between where I’d been and my home. They were the longest seven hours of the 24 we’re given each day.

It was good to be home.

I threw clean clothes into my battered suitcase and headed to a gig in North Dakota.