Participating in the Zeiss Victory Experience is a dream come true 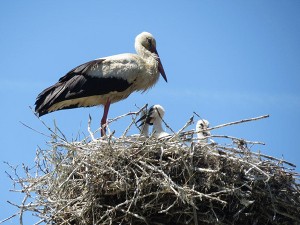 A white stork sits in a nest on a roof in Hungary. – Al Batt/Albert Lea tribune

“Everything is nearly copacetic. I went to the Eat Around It Cafe yesterday. They offer an all-day breakfast, but I had to knock off at four in the afternoon. I had an argument with my sister Cruella. She called me names.”

“And you never call her any names?” I say.

“I do, but it doesn’t hurt as much coming out of my mouth as it does going into my ears. She’s dating Still Bill. He makes a great friend, but he’d be a lousy brother-in-law. He’s cultivating where there isn’t any crop. Still Bill makes more dust than miles. The milk of human kindness sours in his presence. Betty Buyz Furniture Store offered a free recliner to the laziest person in the store. Still Bill was there with Cruella. The store announced, ‘Will all the lazy people come forward.’ There was a mad rush of folks.”

“Still Bill was trying out a sofa to see if it was fit for napping. He didn’t budge. When asked why not, he yawned and grumbled, ‘That’s too much trouble.’ Still Bill won the recliner.”

I was pleased to be one of 34 journalists from around the world invited to Wetzlar, Germany, the City of Optics, to test Zeiss binoculars that were made especially for birding.

I tested the binoculars by birding. Whenever a guy can go birding and pretend that it’s work, life is sublime.

Wetzlar is home to manufacturers of binoculars, microscopes, eyeglasses and cameras. Cutting-edge optics live in Wetzlar.

Wetzlar has been featured in classic literature. The city on the Lahn River was the setting for “The Sorrows of Young Werther,” a famous novel by Goethe. Its narrow, winding streets, historic houses and an unfinished cathedral in the town’s center are examples of the city’s rich past.

I was over the moon to be a part of the ZEISS VICTORY SF Experience in Germany, Austria and Hungary.

I joined other journalists from France, Taiwan, the U.K., India, Australia, Singapore, Germany, the Netherlands and the U.S. It was a case of the odd man in.

When I first heard that song, I thought they were singing about Zeiss binoculars. You know The Beatles, there was always supposed to be a hidden meeting. Paul is dead, etc.

When I was a young whippersnapper birder, Zeiss binoculars were the Holy Grail of optics.

In those days and most of the days thereafter, I used binoculars with names that sounded as if they came in a box of Cracker Jack. Zeiss was a legendary name. Zeiss optics were for when “not bad” just wasn’t good enough.

I live just beyond Hope, a small town in Minnesota. I hoped to see a hoopoe on my trip. I gathered with a throng of ardent admirers of the hoopoe — the bird’s scientific name is Upupa epops — to watch this amazing avian creature. Nice.

I still live just beyond Hope, but I’m not hoopoeless.

Common cuckoos called constantly as if I were visiting a shop filled with Black Forest cuckoo clocks. I was never quite sure what time it was, but, apparently, it was later than it had ever been.

Large nests were on rooftops. Some Hungarians consider it good luck to have a white stork nesting on their homes and put tires on their roofs as bases for stork nests.

The birding was so good, that the only complaint I heard was made by Diane Porter of Iowa who said jokingly, “OK, we’ve been birding for 25 minutes now without me seeing another life bird.”

I hung around Wetzlar with binoculars hanging around my neck.

I made a brief stop at a knitting shop because my wife loves knitting and I love my wife.

I made another brief stop at a bookstore because I love books. Most of the books, as might be expected, were in German. I don’t read German as well as I used to and I was never able to read German.

A fellow approached me. He had no binoculars hanging from his neck. Can you imagine not carrying binoculars into a bookstore? I guess it takes all kinds.

He smiled, pointed at my Zeiss binoculars, made in Wetzlar, of course, and gave me the thumbs up sign.

I like passing along good news. The binoculars tested well. They took my eyes to places where words fail. The Zeiss binoculars were so good, that if I squinted like Clint Eastwood while using them in Hungary, I was able to catch a glimpse of Minnesota. I’m pretty sure.

Voltaire said, “Think for yourself and let others enjoy the privilege of doing so too.” I think that great binoculars plus great birding equals happy camper.

Zeiss has a slogan, “We make it visible.” It’s true.

The Beatles sang, “All you need is love.”

That may be true, but great binoculars help.

“We have lived our lives by the assumption that what was good for us would be good for the world. We have been wrong.” — Wendell Berry

“Any one of us can be a rainbow in somebody’s clouds.” — Maya Angelou