“Everything is nearly copacetic. I remain a misunderstood genius. During the two horrific weeks I spent in college, I learned that you are most apt to see luxury cars in large cities and on my rear bumper. I know you like weather sayings. Here are a couple about the wind for you, my treat. If the wind be still, no weather is ill. The sharper the blast, the sooner it’s past. I shaved my beard and Pop didn’t even notice. I finally had to tell him that my beard was gone.” 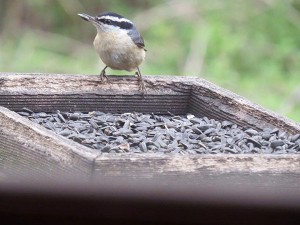 “He said that he didn’t take it and I should take better care of my stuff. Pop has become one those seniors, as in citizen, whose specialty is being annoying to anyone even a day younger than him. The only time he is happy about his age is when it comes with a discount. I’m keeping my hands off the wheel because he is still driving the bus, but Pop worries that whenever he forgets anything that he is developing dementia. I tell him that if he can spell ‘Alzheimer’s,’ he probably doesn’t have it.”

A field of poppies was pleasing as I used my binoculars to find a red-backed shrike on a utility wire in rural Hungary.

I’ve a lifelong habit of scanning trees for a glimpse of something, not wanting to miss what was there. I know that if I look, I might be rewarded.

I looked and listened intently, as if I might encounter angels.

A slight breeze was just enough to be described as “susurrous,” the sound produced as the wind blew through the trees. It’s a whispering or rustling sound that’s not limited to trees, leaves and grasses. Wind turns most everything into a musical instrument. Breezes, streams and frying bacon are capable of producing susurrous sounds.

I saw the shrike. He was a handsome bird.

It proved once more that if we really look at a bird, we see far beyond it.

Helen Isabel Moorhouse wrote, “And I think, if you listen closely In the sweet glad days of spring, With the song of the brook, the breeze, and the birds, You can hear the flowers sing.”

Farley Mowat is known for his books about the Canadian Arctic. He became interested in that area as a teenager while on a birding trip to the Arctic tundra. While there, he saw a herd of caribou and that sight stuck with him the rest of his life. He became employed by the Canadian government as a biologist in the Northwest Territories. His assignment was to study wolves and their effect on the caribou population. He found that the wolves had little impact. His research resulted in the book “Never Cry Wolf.” The Russian government banned the slaughter of wolves because of the findings and the book became a bestseller.

“Do pheasants lay eggs in wild turkey nests?” Yes, ring-necked pheasants are nest parasites of wild turkeys. Wild turkeys do something called “egg dumping,” which means that they will lay eggs in another turkey’s nest. Both pheasants and turkeys will lay eggs in the nests of ruffed grouse. Wild turkey females raise one brood per year. The nest is a shallow depression in the ground, typically surrounded by dense brush, vines, tangles, deep grass or fallen trees. The female lays four to 17 eggs and incubates them for 25 to 31 days. The chicks are precocial, able to walk and feed themselves within 24 hours of hatching. The hen broods the chicks at night for two weeks after hatching.

“Why do I see Canada geese flying northward in June?” The Canada geese are traveling north to molt. During molt, geese are flightless. These flocks consist primarily of yearlings, non-breeding adults and pairs that failed to raise young. The flocks form in early May. Most of the geese we see end up on the shore of Hudson Bay. Once the molt is finished and the geese have regained their ability to fly, they begin their flight back to Minnesota around Labor Day.

“What could I do to eliminate squirrels and grackles at my bird feeders?” You might try feeding safflower seed, an annual oil seed grown in the U.S. and Canada. It has a hard, white, outer hull. Safflower is high in protein and provides oil, meal and bird seed. It attracts a large variety of birds, but it’s not a favorite of squirrels and grackles.

Raspberry thickets are favored nesting locations for indigo buntings. The dense, thorny stems provide the nestlings with protection from many predators and the berries are a convenient source of food.

I watched a black tern glide elegantly over a small wetland. A tern is like a sleek version of a gull. The black tern is a graceful bird. This one fluttered like a swallow as it snatched flying insects over a pond.

An employee at Oxbow Park, near Byron, brought out one of the park’s education birds, a northern saw-whet owl. It was an adorable little thing, maybe 7-inches long, dwarfed by the nearby big bluestem that can reach 7 feet.

“I had never paid much attention to spiders until a few years ago. Once you begin watching spiders, you haven’t time for much else — the world is really loaded with them. I do not find them repulsive or revolting, any more than I find anything in nature repulsive or revolting, and I think it is too bad that children are often corrupted by their elders in this hate campaign. Spiders are skilful, amusing and useful, and only in rare instances has anybody ever come to grief because of a spider.” — E. B. White, author of “Charlotte’s Web”

“Zeal without knowledge is like speed to a man in the dark.” — John Newton, who composed the hymn, “Amazing Grace”