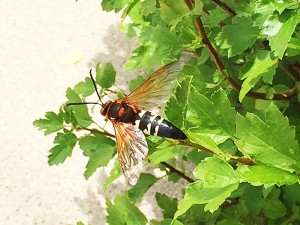 “Everything is nearly copacetic. Have you ever stopped to consider that humanity owes its existence to a six-inch layer of topsoil and the fact that it rains? The Anderson’s dog thought about that and bit me.”

“The Anderson’s dog doesn’t have a tooth in its mouth,” I say.

“That’s because they are all in my leg. When he bit me, it made me hungry. That’s because I’ve always liked food too much. I think it goes back to when Ma worked as a lettuce bender at the dime store.”

“A lettuce bender?” I wonder aloud.

“Yeah, she bent the lettuce so it would fit on a BLT sandwich. I’ve decided to lose a few pounds. One of my idiotic brothers told me that if I put on one more pound, I’d need to start whistling when I come to railroad crossings. So each morning for breakfast, I have two jelly doughnuts and three cans of diet pop.”

“How can you lose weight that way?” I say.

I was taking pleasure in the dance of the day.

I watched an ant drag a feather for over 45 feet before it disappeared into thick vegetation. She made it look as light as a feather.

The weather was hot, as might be expected during the Dog Days, lasting from July 3 through Aug. 11, named for the dog star, Sirius, which rises and sets with the sun during this period.

Hartland is a place known for its wise people who drive in the shade during the Dog Days. Following the example of my betters, I step into the shade and am scolded by a wren. There is a European fable that tells the tale of an eagle and a wren that were competing to be king of the birds. The one who flew highest would be king. The eagle flew off, not knowing that the wren was resting upon the eagle’s back. The eagle flew as high as it could. When it grew too tired to fly any higher, the wren popped out and flew above the eagle.

I took a picture of a handsome, male common grackle. I did so for no other reason than that the bird must be one of our least photographed common birds.

This single page of the Dog Days was delightful. Laura Ingalls Wilder might have been thinking of it when she wrote, “I am beginning to learn that it is the sweet, simple things of life which are the real ones after all.”

Penny Jacobsen of Albert Lea told me that she was picking raspberries with two youngsters — one 6-years-old and the other 7.

Raspberry picking is a great job because of the reward waiting at the end.

The kids were doing a great job. The containers were filling with berries.

Penny thought such diligence should be encouraged, so she told her helpers that they could eat a few of the delectable berries if they wanted.

The kids declined, protesting that the raspberries must be washed first.

Penny admitted that the berries needed to be washed, but it wouldn’t hurt to eat a few in their present condition.

The kids once again refused. This time adding their real reason for not eating the raspberries.

“We can’t eat them. They have mosquito poop on them.”

I did a book signing at the New Richland Public Library. Thanks to all who attended the full house. Barb Wildgrube of New Richland asked me about a bird song she had heard. She gave her rendition of the song. I was stumped. I had no idea what bird it could have been.

I ran into Barb a couple of months later at the same library. She told me that the birdsong turned out to be the birdlike whistling of a man who walked by Barb’s house regularly.

“I picked up a baby rabbit. Will my scent keep the mother away?” No, the mother will not abandon her baby just because the scent of a human is on it. No more than your mother would dump you because you smell like a rabbit.

“This spring, I had tiny red creatures on my houseplants. Are they chiggers?” Clover mites are a common nuisance in and around Minnesota homes. They are most noticeable in the fall and again in the spring. This mite is slightly smaller than the head of a pin with a reddish or reddish-brown body. When a mite is crushed, it leaves rusty or blood-red spots.

“Will putting out chewing gum drive gophers or moles away?” It does not. All you are doing is flaunting your wealth in the face of a penniless creature by showing that you have so much money that you can waste gum. Bubblegum doesn’t work either.

“Do ants help peony buds open?” The ants are there for a sugar fix, attracted to the peony flower buds because they secrete a sweet, sticky substance just prior to opening. They do the flowers no harm.

Goldfinches molt their body feathers twice a year, in the spring before breeding and after nesting in the fall.

Rock pigeons, house sparrows, European starlings and barn swallows occur in more than 80 percent of cities according to a global study of biodiversity in urban areas published in “Proceedings of the Royal Society B.” Cities aren’t a refuge for birds and plant life, as they support 92 percent fewer bird species and 75 percent fewer native plant species than in equivalent undeveloped lands.

“Use the talents you possess — for the woods would be a very silent place if no birds sang except for the best.” — Henry Van Dyke