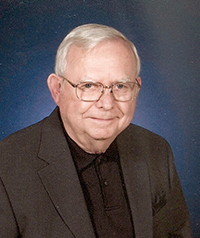 Dean worked at Queen Stove and then made his career working for the United States Postal Service for 33 years, retiring in 1996. In addition, he had many talents and interests, including woodworking, restoring antiques, camping and fishing. There was almost nothing Dean could not fix! In their early years of retirement, Dean and Gloria moved to Bradenton, Fla., for eight years. They enjoyed the sunshine together and Dean got interested in genealogy, eventually compiling over 11,000 names and many interesting anecdotes in his research of the Peterson and Trytten families. In 2004, Dean and Gloria moved back to Minnesota and lived in Alden for almost 10 years. While in Alden, Dean was active at Redeemer Lutheran Church, volunteered many hours at the Community Museum and greatly enjoyed maintaining the perfectly groomed lawn at their home. In December 2013, Dean and Gloria moved to Apple Valley.

Grandpa Dean loved and was loved by his family. He also loved the many pets the family had over the years, especially their cherished poodle, Harry, who kissed Grandpa Dean goodnight every night without fail.

The family rejoices Grandpa Dean is at peace with the Lord, and they take comfort that his name is written in the Book of Life. They trust and believe that they will all be together again someday in heaven. They are thankful for the time they had with him. God bless his memory.

Funeral services are scheduled for 11 a.m. Wednesday at Hosanna! Church, 9600 163rd St. W., Lakeville, with visitation one hour prior. Henry W. Anderson Mortuary, Apple Valley, is in charge of arrangements.