Pulling, cutting, chemically treating: how to get rid of buckthorn

“Everything is nearly copacetic. It’s one of those days when it’s hard to tell which is the spaghetti and which is the worms. I’ve been eating unfaithful snacks — Cheetos. Heat makes things expand. That means I haven’t put on any weight. I’m a victim of global warming.”

“What’s with all the bumps and bruises?” I say. 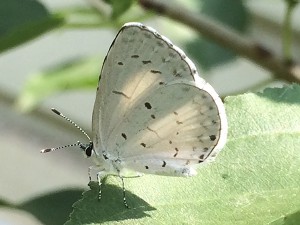 “Here’s a tip for you. Never play horseshoes in the dark. If a horseshoe had knocked me out, I’d have been okay. I have the Eat Around It Cafe listed as my emergency contact. Weasel is mad at his cat. It’s a feline that’s not afraid to poop outside the box. Weasel is a piece of work. His toaster has a snooze button. We were the ones who told him to put a window air conditioner in his old car when we were in high school. It’s probably our fault that he’s the way he is. A hubcap flew off a speeding Pontiac. Weasel was mowing the lawn when he saw the hubcap fly overhead. He thought it was a UFO.”

“An honest mistake,” I say.

“True, but he told everyone that he’d been abducted.”

The yard moved from the torment of an abundance of dratted free-range mosquitoes to not having enough shade for a hot toad.

I petted bumblebees. I do that every year. It doesn’t seem to bother the bumblebees and it delights me. I pet them as they busy themselves on flowers and the bumblebees ignore me as if I were terms and conditions. They have never stung me in response, but I don’t recommend the activity.

I watched American goldfinches, granivores eating seeds. The bright yellow of the males delighted me.

I was working at the county fair. It’s nice doings. There were four young children crying in the conservation building. My son has five children and has learned that he can be only as happy as his most miserable child. The parents of each of the crying four dragged their reluctant children to the fish tanks filled with, wait for it, fish. Each of the kids stopped crying and watched the fish.

Nature, even when in captivity, has the power to soothe.

“How long do baby cottontail rabbits remain in the nest?” The young are born blind and without fur, but within a week their eyes are open and by the second week their fur has grown in. Young rabbits develop quickly and will leave the nest when they are about three weeks old.

Vern Frydenlund of Hayward asked how to get rid of buckthorn. If less than three-eighths inch in diameter, remove by hand. Small seedlings can be pulled. If greater than three-eighths inch, use a hand tool that pulls the shrub out, easier done when the soil is moist. Spray foliage of seedlings with an herbicide. Glyphosate will kill all actively growing vegetation on which it is sprayed. Triclopyr kills broadleaf plants and will not harm grasses when applied properly. Buckthorn two inches in diameter or larger is best controlled by cutting the stem at the soil surface and treating the stump within two hours after cutting with a herbicide containing Triclopyr (such as Ortho Brush-B-Gon or Garlon 3A or 4) or Glyphosate (Roundup). The best time to cut and chemically treat the stumps is in late summer and fall. Avoid treating buckthorn in May and June when the tree is putting out leaves. Herbicides can be applied to stumps with a paintbrush, wick applicator or a low-volume sprayer. Buckthorn seeds can remain viable for up to five years in soil.

Connie Probst of Albert Lea wondered if it’s true that pelicans feed blood to their young. The female pelican was once believed to be so devoted to her young that she’d peck at her own breast to feed them with her blood. As a result, the bird came to symbolize the crucifixion and Jesus sacrificing himself for the world. The legend of self-wounding and the provision of blood may have arisen because of the impression a pelican sometimes gives of stabbing itself with its bill. Another possible derivation is the tendency of the bird to rest its bill on its breast.

Harlan Lutteke of Alden asks if there are fewer Canada geese in Minnesota this year and how long pheasants stay with their mother. The DNR survey showed a slightly over 2 percent decrease in the breeding population of Canada geese. A ring-necked pheasant incubates eggs from 23 to 28 days. The chicks are precocial, so they leave the nest as soon as they are dry. The hen guides her chicks in finding insects, plentiful food high in protein. By two weeks of age, chicks can fly short distances. Their adult feathers start coming in after six weeks. By fall, the young birds resemble their parents. They stay with their mothers for at least 10 weeks.

Bryce Gaudian of Hayward asked how long weed seeds are viable. The answer depends on the species. Seeds of most annual grasses die after two or three years, but some broadleaf weed seeds last for decades. On average, weed seeds are depleted in about five years if no additional seeds are added.

A misting of vanilla extract keeps biting gnats away — at least for some folks.

“Nature will bear the closest inspection. She invites us to lay our eyes level with her smallest leaf, and take an insect view of its plain.” — Henry David Thoreau

“To practice any art, no matter how well or badly, is a way to make your soul grow. So do it.” — Kurt Vonnegut