“Everything is nearly copacetic. I had a good day until I got up. I’ve had more part-time jobs then Carter used to have Little Liver Pills. Despite the many oppressive overlords I’ve worked for, I continue to struggle. I’m finally getting ahead. That’s only because I raise cabbage. Forgive us our debts as we forgive those who call to harass us about our debts. I’ll make money writing an autobiography if I can decide who to write about. Weasel told me that badgers are crossbreeding with skunks. If that’s true, we’ll have badger/skunk hybrids. We don’t need no stinking badgers! Weasel and I and a man with a wooden leg named Irving, I’m not sure what his other leg is named, have been going to the gym every day. It’s a lot of work. I’m going to stop going. I’ve found a better way and it’s simple. I’m a genius with a capital ‘J.’ I’m going to quit calling my bathroom the John and start referring to it as the Jim. Henceforth, when the topic of exercise comes up, I’ll be able to brag, ‘I go to the Jim every day.’” 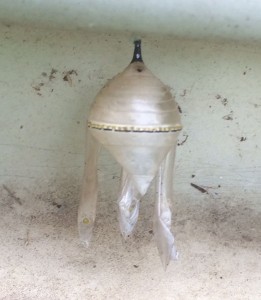 A monarch butterfly has flown the coop — and its chrysalis. – Al Batt/Albert Lea Tribune

Ten wild turkeys strolled through our yard as my wife and I ate dinner. There were two hens and eight poults. Male wild turkeys provide no parental care. Newly hatched chicks follow the female, who feeds them for a few days until they learn to find food on their own. As the chicks grow, they band into groups composed of several hens and their broods.

The appearance of the turkeys caused us to notice a yard filled with dragonflies swarming high and low in the pursuit of flying insects. After the turkeys had cleared the yard, my wife and I walked outside. We were following the advice of Rumi, who said, “Lovely days don’t come to you, you should walk to them.”

Swallows flew above the dragonflies, in search of the same prey. A common nighthawk flew overhead on wings resembling boomerangs. Not a good day to be a flying insect.

A walk is a high bid for joy. Birding knows no season.

Tiptoeing through the Tulipa gesneriana

Years ago, I went for a walk at a state park with an older friend. Her love of wildflowers was evident. She not only could identify each plant we encountered, she called them by their scientific names.

“How can you possibly know the proper names of so many different flowers?” I asked.

She smiled and replied, “You remember the names of your friends, don’t you?”

“Do honey bees harm our native bees?” No one has been able to determine that this introduced species has had any detrimental effect upon our native pollinators.

“What should I do with an orphaned bird that I found on the ground?” It’s probably not an orphan. Young birds often leave their nests before they are able to fly. If it’s not feathered, put it back in the nest if that is possible. If it’s feathered, let it be or move it out of harm’s way. That may sound callous, but it isn’t. Its parents are likely tending to it. The parents do a better job of raising baby birds than we could ever do. Would you want your baby taken care of by birds? Probably not. That’s because you would do a better job raising it than would a bird. It works the same in reverse.

Alice Kluver of Albert Lea, Jerry Viktora of Ellendale and Harlan Lutteke of Alden asked why are there so many dragonflies now. This is the time for them to be out. Populations are high now. They prey upon flying insects — flies, ants, moths, beetles and whatever they catch. This hunting can lead to a swarming frenzy. Dragonflies eat mosquitoes, but not enough. The reason being that the dragonflies work days and the mosquitoes tend to work mostly at night. There are around 140 species of dragonflies and damselflies in Minnesota. Some migrate.

“What do woolly bear caterpillars turn into?” The bears turn into tigers. The woolly bear or woolly worm emerges from its cocoon in the spring as a lovely Isabella tiger moth. According to legend, the wider the middle brown section, the milder the coming winter will be. Conversely, a narrow brown band is said to predict a harsh winter.

The wattle is the flap of skin under a turkey’s chin. Caruncles are fleshy bumps that grow on the turkey’s head and throat. The snood is a fleshy flap that hangs from the beak.

The area of forest in Mexico occupied by monarch butterflies last winter was just 1.65 acres, 56 percent of the previous year’s acreage. In the mid 1990s, wintering monarchs filled almost 45 acres of Mexican forest.

The Neighborhood of Make-Believe was a fictional kingdom inhabited by hand puppet characters on the children’s television series “Mister Rogers’ Neighborhood.” King Friday XIII was the neighborhood monarch and had two pet birds named Troglodytes aedon and Mimus polyglottos. These are the scientific names, in genus and species, of the house wren and the mockingbird, respectively.

“Live with intention. Walk to the edge. Listen hard. Practice wellness. Play with abandon. Laugh. Choose with no regret. Appreciate your friends. Continue to learn. Do what you love. Live as if this is all there is.” — Mary Anne Radmacher

“Everything has beauty, but not everyone sees it.” — Confucius