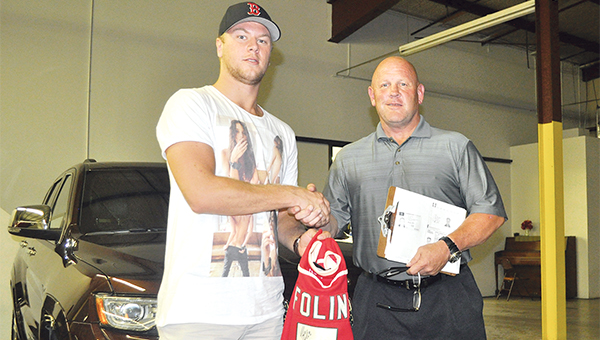 Christian Folin of the Minnesota Wild meets with Steve Moline of Holiday Cars in Austin Thursday. Folin, who used to play with the Austin Bruins, was in town to purchase a vehicle. — Rocky Hulne/Albert Lea Tribune

Christian Folin has been through a lot in the last couple of years, but he’s still the same guy.

The former Austin Bruins defenseman who played in the Frozen Four at UMass-Lowell and played in an NHL game with the Minnesota Wild last year was back in Austin as he visited Holiday Cars Thursday. Folin didn’t come to town to boast or brag, it was to buy a car and meet up with Bruins head coach Chris Tok.

Despite being signed on for one more year with the Wild, Folin still seeks advice from Tok.

“We talk on a regular basis and I still look up to him the same way that I did when I played here,” Folin said. “Now that I have the courage to actually talk to him. I didn’t really have that when I played for him.”

Folin, a 23-year old, 6-3, 215-pounder from Gothenburg, Sweden, spent two seasons with the Bruins and he had a great time watching the Bruins make it to the Robertson Cup last year. Alex Pettersson, who played last season for the Bruins, is also a native and Sweden and he happens to be friends with Folin’s younger brother.

Folin watched the Bruins beat Topeka to get to the Robertson Cup with one his friends from UMass-Lowell — Zach Kamrass, a defenseman who had his younger brother Jake, a UMass Lowell commit, playing for Topeka.

“He’s one of my best friends, so we had a couple of tough nights watching those games,” Folin said.

Folin had the rush of playing for the Wild one game last season and he tallied an assist and recorded a plus three in the game. He said it was a great experience, but he knows that nothing is guaranteed and Folin is already preparing for training camp.

“I think every player has to earn it,” Folin said. “Nothing comes for granted and that’s something I’ve learned over the years. You have to work for everything and you don’t get anything for free.”

Folin would love to be on the Wild roster when this season rolls around and he thinks the team has a chance to make another playoff run.

But for time being, he chooses to stay grounded.

“My life hasn’t changed a whole lot,” Folin said. “I’m still the same guy and I still do the same things. It’s a lot of fun to be a part of and it’s something I’ve dreamt about for a long time. I’m glad it’s finally there, but I’m going to prepare hard to be able to take a roster spot.”

The Wild will open their season at home against the Colorado Avalanche at 8 p.m. Oct. 9.