“Everything is nearly copacetic. I saw a giant moth in my yard. It knocked down a tree. I figure it was a mammoth. At least that’s what I’m calling it. I’ve finally figured out that it’s not what you know that matters, it’s what you can think of in time. The future isn’t what it used to be, but a handsome man is a happy man. And I am delirious. I went to my cousin Cedric’s church last Sunday. Cedric still uses the kitchen as his weight room and stores fat between his ears. I went to his church because Cedric was preaching. He was as nervous as a clam walking by a chowder factory.” 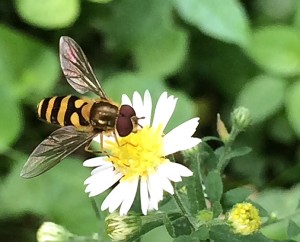 “No, he attends this tiny church that has had difficulty in finding a minister to replace their old pastor who had moved onto a bigger church. One large enough that he wouldn’t have to step outside in order to change his mind. Cedric was preaching because he didn’t see the sign.”

“The sign in the parking lot near the side door of the church that read, ‘You park here, you preach.’”

Goldfinches bickered and catbirds meowed. Honey bees had taken control of the grape jelly feeders. Flower flies buzzed around. Our yard had become a place of congregating monarch butterflies. Uffda! What a blessing.

Aristotle said, “In all things of nature there is something of the marvelous.”

The night before, a star had flown across the sky. I made a wish. It wasn’t that the monarchs would gather nearby, but maybe it should have been.

I attended an Albert Lea Audubon Society program recently. The presenter was Darcy Sime of Alden who did a wonderful program on photography. Darcy has had photos in all three “Capture Minnesota” books. The latest of that series had 332,000 photographs submitted from over 8,000 camera carriers. Darcy had three photos accepted for that publication featuring 250 images.

Darcy spends a lot of time at Myre-Big Island State Park stalking photo subjects. One day, she surprised a skunk. She thought she might be the first person to call into work, saying she can’t come in because she stinks. Fortunately, that wasn’t necessary. The skunk waddled off, still fully loaded.

Darcy offered some tips for better photography. Watch the background so that it’s not distracting. Leave room for forward motion in photos so that it appears that the subject has room to move. Getting the camera down to the level of the subject changes the depth of field. It makes the subject appear closer and the background farther away. Keep the subject’s eyes in focus.

For point-and-shoot users, she said that portrait mode offers a shallow depth of field and low f-stop. Landscape mode provides high f-stop, allowing a large depth of field for focusing on distant subjects. Sports or action modes give fast shutter speed limits, low f-stops, and might require a boost in ISO to eliminate blurriness or noise in the photos.

Darcy hears this often, “You must have a really good camera.” She says that hers is a mid-level camera. She will do weddings if the bride and all of the female members of the bride’s family are extremely easy-going.

Darcy has been to Wiseman, Alaska, to shoot the northern lights and has taken her Nikon camera to Yellowstone in the winter. On her bucket list? She wants to photograph polar bears. I know she will and she will do it well.

Darcy is a member of the Lens & Shutter Club. The work of club members hangs at Farmers State Bank in Albert Lea.

“How did the house sparrow get to this country?” The house sparrow was introduced into Brooklyn, N.Y., in 1851. By 1900 it had spread to the Rocky Mountains. Two more introductions were made in San Francisco and Salt Lake City in the 1870s. The reasons given for introduction were to establish wildlife familiar to European immigrants and to control insect infestations.

“How long do dragonflies live?” At the shortest, the lifespan of a dragonfly from egg to the adult’s death is about six months. There are dragonflies that live several years as aquatic larvae before emerging and surviving for a few months as adults. There are species that migrate. The green darner is one of those. Little is known about its migration, which has been recorded from late July into early October, typically following a cold front. Darners that fly south don’t make a return trip. Birders have long observed the dragonfly migration. Kestrels often migrate along with a dragonfly swarm, feeding on the insects. The dragonflies serve as an important food source for kestrels, especially juvenile falcons that are inexperienced hunters.

“When do deer shed their antlers?” White-tailed deer bucks begin growing antlers in the spring, normally in April. Covered with a vascular skin called velvet, the antlers grow until late summer or early fall, when the velvet dies and the bucks scrape it off. The antlers cease growing and harden. Bucks keep their antlers until the rut has finished. They usually shed antlers in late December, January and February, though some bucks shed them as early as late fall and as late as spring.

A monument at Wyalusing State Park in Wisconsin was originally dedicated in 1947, with Aldo Leopold providing the inscription. The monument is a bronze plaque, set in a limestone edifice, with the likeness of a passenger pigeon perched on an oak branch engraved with the words, “Dedicated to the last Wisconsin Passenger Pigeon shot at Babcock, Sept. 1899. This species became extinct through the avarice and thoughtlessness of man.”

“You can’t live a perfect day without doing something for someone who will never be able to repay you.” — John Wooden

“Nature is painting for us, day after day, pictures of infinite beauty.” — John Raskin