Feeding birds can be expensive, but not many birds eat mushrooms

“Everything is nearly copacetic. My new vacuum cleaner comes with a mounted front-end plow attachment that really speeds up house cleaning. I’ve had a good day. That’s one in which I have only delicious food stains on my clothing. Some people like Warren Buffett. Others like Jimmy Buffett. I love an all-you-can-eat buffet. Speaking of eating, Weasel, who won’t even play solitaire with himself, was just over and we whipped up some chili sandwiches. They are messy, but I like them and Weasel can eat them. His menu choices have been limited since the Tooth Fairy mugged his gums. Cutting onions causes Weasel’s eyes to water and he tends to whine about things. I told him that it would help to cut the onions underwater, but he told me that he couldn’t do that. He can’t swim. Weasel was just in Minneapolis. He says he’d rather be in jail in Hartland than be the mayor of Minneapolis. He said that there is something about city women that makes his eyes water whenever he gets close to one. He blames it on the perfume they wear.” 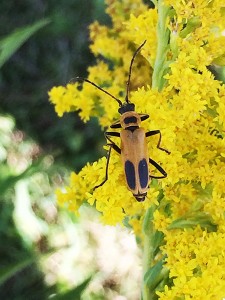 A walk to remember

I wasn’t doing any of the things that I’d feel guilty about not doing, so I stumbled outside.

Thoreau wrote, “An early-morning walk is a blessing for the whole day.”

Each time I go for a walk, I see something I’ve never seen before. A backyard is an exotic realm.

Moving about certainly loosens the gears. A backyard is a fine place to savor nature, even on a day muggier than an A&W Root Beer stand. I heard the harsh gnawing sound of a squirrel working on a walnut. A flicker cackled and there was a trembling in the treetops. Warblers flitting through. Many of these tiny birds are now camouflaged in grays and browns. I watched the bird feeders. Birds are oracles. If the activity at the feeders increases, I know that some challenging weather might be moving in. The grape jelly feeders were suffering from an oriole overload. No weather worries there. The orioles were merely fueling up for their long migration.

A cabbage white butterfly fluttered through the yard. This insect is one of the most common butterflies in the U.S. It’s commonly seen from early spring until late fall. It was introduced from Europe in the 1860s and the larvae of this butterfly are a principal pest of cabbage and other cole vegetables. The cabbage white has continual broods and a long flight period.

Clouds passed overhead like waves on an ocean. A common egret, lengthy in black and white, flew above. I was happy to see it. It’s impossible to live life without egrets.

The Carpenters sang, “Why do birds, suddenly appear?

Every time you are near. Just like me, they long to be,

Either that or you just happened to go for a walk in your backyard.

A couple with a mutual craving for something cool and sweet, drove to their favorite ice cream shop. They bought ice cream cones and returned to their car to be comfortable. As they settled back to enjoy their sweet treats, two crows landed on the hood, cawed loudly, and pecked at the windshield. The man figured out what they wanted. He got out of the car and put his ice cream cone on the hood. The crows immediately calmed down and began eating the cone. “You’re wonderful,” said the wife. “How did you ever think of it?”

“Nothing to it,” he replied. “It was just a case of stilling two birds with one cone.”

Stories of nature from here and there

Carol Bertelson of Albert Lea told me that a baby skunk was live trapped in her neighborhood. Her terriers found the captive skunk interesting. The skunk was released from the trap easily. It wasn’t so easy releasing the dogs from the smell.

Pam Pleiss of Albert Lea saw a baby grackle that had, like many songbirds, left its nest before it could fly. The young bird fell through a crack in the deck of the house. The parent grackles fed the youngster through that same crack in the deck. Pam and her husband freed the young grackle when it was able to fly.

The man on the moon

I had a great look at the man on the moon. He’s an old fellow carrying a bundle of sticks on his back. Sometimes he carries a lantern. He’s accompanied by his little dog. He had been banished there for gathering firewood on the Sabbath. This is according to European folklore.

“If your hummingbird feeders are troubled by wasps and bees, try using a bowl feeder that is only half-filled. The hummingbirds will still be able to reach the liquid. The insects will have difficulty.

“What birds eat mushrooms?” Not many. Gray jays and spruce grouse are fungi fans. A number of mammals feed on fungi.

“Feeding birds can get expensive. Is there something cheaper I could do to attract them?” What could be finer than having birds at the diner? If you want to give up your franchise for your local fast food restaurant bird feeder, put out water. Birds need water. Various plantings will also attract your avian amigos.

“How long does it take for discarded cigarette filters to decompose?” Studies have shown that it takes one to five years.

“Normal day, let me be aware of the treasure you are. Let me learn from you, love you, bless you before you depart. Let me not pass you by in the quest of some rare and perfect tomorrow.” — Mary Jean Irion