Vernon Lee Gordon, 86, of Northwood died Saturday, Sept. 6, 2014, at St. John’s Lutheran Community in Albert Lea. Funeral services for Vernon will be at 11 a.m. Friday at First Lutheran Church, 309 N. Ninth St. in Northwood, with the Rev. Judy Converse officiating. Burial will be in the St. Ansgar City Cemetery. Visitation will be from 5 to 8 p.m. Thursday at Schroeder & Sites Funeral Home in Northwood. 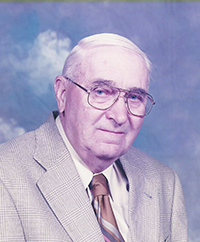 Vernon Lee Gordon was born April 14, 1928, in Austin, the son of Melvin Luellyn “M.L.” and Ada Gordon. Vernon attended the Otranto Consolidated School District through grade 10, when the school closed. He then transferred to St. Ansgar High School and graduated two years later.

Vernon was a member of Deer Creek Lutheran Church, Carpenter, for most of his life.  He was baptized July 1, 1928, and confirmed May 21, 1942. He served on the church council and assisted with Luther League activities. Following his retirement and move into town, Vernon joined First Lutheran Church in Northwood.

Vernon married Agnes Sponheim at First Lutheran Church in St. Ansgar Nov. 23, 1952.  This marriage was blessed with three daughters, Barbara, Mary and Joyce. Vernon and Agnes worked together on their farm where they raised hogs, oats, corn and soybeans.  They made all the decisions for the farming operation together, including building the first hog confinement building in the area in 1969 when Vernon’s arthritic body could no longer tolerate the weather extremes. The Worth County Pork Producers recognized him as a master swine producer in 1992. Vernon enjoyed serving on the Farm Bureau and Farm Service boards for several years. Following the couple’s retirement, Vernon continued to help on the farm as long as he could and still wanted to be able to do farming tasks while in the retirement home.

Vernon loved to visit with friends and family and was known for his teasing and humor.  He enjoyed woodworking during his retirement years. Agnes and Vernon created a wonderful display of family memorabilia in their basement, including old toys, tools, farm caps and furniture. They decoupaged tractor pictures from farm calendars to hang on the walls. The family refers to the basement as “The Gordon Museum.” Despite many health issues, the couple was able to celebrate their 60th wedding anniversary in 2012.

Those left to cherish his memory are his three daughters, Barbara Gordon of Clive, Iowa, Mary (Jan) Zach of Percival, Iowa, and Joyce (Doug) Tempus of Northwood; four grandchildren, Sara and Aaron Zach of Sidney, Iowa, and Laura and Tyler Tempus of Northwood; one great-granddaughter, Grace Zach, of Sidney, Iowa; sister-in-law, Dorothy Sponheim, of St. Ansgar; two nephews, Dennis (Bunita) and Wayne (Anita) Sponheim, of St. Ansgar; one niece, Dianne (Craig) Stange, of Bismarck, N.D.; and many other relatives and friends.