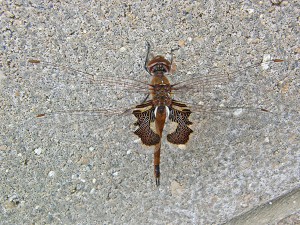 A photo of a black saddlebags dragonfly by John Eisterhold of Austin. – Provided

“Everything is nearly copacetic. I slept like a log. I woke up with an ear cramp in the fireplace. Even though my face looks like I slept in it, the cashiers are always checking me out. I’ve been buying lottery tickets in an attempt to make something out of myself before Christmas gets here. I’ve done that before. If déjà vu is the feeling of being in a familiar but forgotten place and having had a similar experience before, then vuja de must be the feeling of being in a totally unfamiliar place and not knowing what the heck is going on. I have both those things. There were so many bugs out the other day, that my windshield was completely covered with insects. I had to back all the way to town. The world is aligned against me. That’s the burden of a righteous man. My dog Motorboat had another litter of puppies. As if my life wasn’t full enough.”

“Why do you call her Motorboat?” I say.

“Because she goes pup, pup, pup, pup… The good news is that now my Christmas shopping is done. Everybody on my list is getting a puppy.”

Leaves trembled in the rain. The time of green was passing.

I walked to the mailbox. A Cooper’s hawk flapped and glided over a poor soybean field, one filled with drowned or stunted plants. Six killdeer took to the air, calling, “Killdeer.” A treasure trove of birds joined them, followed by a twisting and turning flock of blackbirds.

The problem with describing birds is that it’s impossible to do them justice.

The voices of the songbirds had faded away with the season. Frogs and toads were silent. The trill was gone. Earlier in the week, I’d watched a raccoon eating a slice of pizza. I wondered if it had it delivered.

Honey bees clung to a window utilizing their sticky feet. A fly buzzed loudly and spun wildly in its spider web dungeon. Dragonflies and wasps were numerous.

Bald-faced hornets are great at preying upon cabbage worms and other garden pests. They make a large, football-shaped nest. When I was a boy, a neighbor blasted a hornet nest with his shotgun. His kids had gathered to watch the event. They shared the stings with their father.

Kathy Bolin of Rochester wrote of her birding experience in Chingaza National Park just outside of Bogota, Colombia, in the High Andean Paramo landscape. “This area is called the ‘water factory’ for Bogota’s 8.5 million people. It’s tropical but cold. The day was misty, overcast, a bit windy at times but lovely. The first bird I saw was an eastern meadowlark. It was great as we used to have those at the farm when I was growing up, but they have not been there for years. It was like a gift.”

Cher Ami was a registered carrier pigeon, one of 600 birds owned and flown by the U.S. Army Signal Corps in France during World War I. He delivered important messages within the American sector at Verdun. Cher Ami, shot through the breast by enemy fire, returned to his loft with a message capsule dangling from the ligaments of a leg that had been shattered by enemy fire. It was from Major Whittlesey’s Lost Battalion of the 77th Infantry Division. A few hours after the message was received, 194 survivors were safely behind American lines. Cher Ami was awarded the French Croix de Guerre for heroic service. He died as a result of his battle wounds and was inducted into the Racing Pigeon Hall of Fame in 1931.

Climate change threatens bird species in the U.S. and Canada, including the bald eagle and dozens of other species like the common loon, Baltimore oriole and brown pelican, according to a study published by the National Audubon Society. The study identifies 126 species that will lose more than 50 percent of their current ranges — in some cases up to 100 percent –- by 2050, with no possibility of moving elsewhere if global warming continues on its current trajectory. A further 188 species face more than 50 percent range loss by 2080, but may be able to make up some of the loss if they colonize new areas. Maryland could lose the Baltimore oriole — its state bird and the mascot of its Major League Baseball team because of global warming. The common loon, Minnesota’s state bird, may not be able to raise its young anywhere in the contiguous 48 states by 2080.

Geri Cashion asked, “Why do bumble bees crawl into flowers on cool days?” For the warmth. It’s warmer there than the ambient temperature. I’ve found bumble bees that have had a sleepover inside a flower.

Jack Madsen of Mankato asked what monarch butterflies feed on during migration and over winter? Monarchs store enough fat so that most don’t eat while overwintering. It’s important that there are flowering plants along their spring and fall flyways. They feed on nectar while traveling. During migration, the monarchs feed extensively on flowers to gain carbohydrates from nectars. They do drink during the winter, so it is crucial that water or dew is available.

Karen Vanderploeg of Hollandale asked what is the largest spider in Minnesota. Fishing spiders are the largest spiders in Minnesota with a body length up to one inch long. Including the legs, they can be several inches across. A fishing spider is generally brownish and can have stripes on the body and chevron markings on the abdomen. Fishing spiders are associated with water, such as ponds or lakes, where they feed on insects, tadpoles and small fish. They don’t construct webs, but use silk to fasten leaves together into a nursery for egg sacs.

“Where there is great love, there are always miracles.” — Willa Cather