Marcella Rose (Boeck) Staloch, 90, of Wells died Wednesday, Oct. 29, 2014, at Parkview Care Center in Wells. Mass of Christian burial will be at 11 a.m. Monday at St. Casimir Catholic Church in Wells. Visitation will be from 2 to 5 p.m. Sunday at Bruss-Heitner Funeral Home in Wells and will continue one hour prior to the service at the church on Monday. Interment will be in St. Casimir Catholic Cemetery, and the Rev. Thomas Niehaus will officiate. 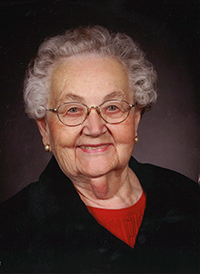 Marcella Rose was born Sept. 13, 1924, in Walnut Lake Township, the daughter of Frank and Hedwig (Klocek) Dulas. She married Alfred J. Boeck on Nov. 23, 1948, and to this union three children were born, Sharon, Donald and Ronald. Alfred died Aug. 20, 1955. She later married George B. Staloch on Jan. 30, 1961. George died Feb. 28, 1995. Marcy was a faithful member of St. Casimir Catholic Church. Marcy loved to cook and bake, and was especially known for her mocha cakes. She also enjoyed cake decorating, gardening and canning.

She is preceded in death by her parents; husbands; stepson, David Staloch; and brothers Roger and Anthony Dulas.