Funeral services for Raymond Francis Yost will be at 10 a.m. Saturday at St. Theodore’s Catholic Church. The Rev. Timothy Reker will officiate. Interment will be at St. Theodore’s Cemetery. Military honors will be accorded by local servicemens organizations, VFW and American Legion. Visitation will be from 4 to 7 p.m. Friday with a prayer service at 6:45 p.m. at Bayview/Freeborn Funeral home and one hour prior to the service at the church. Online condolences are welcome at www.bayviewfuneral.com. 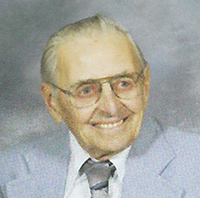 Ray was united in marriage to Donna Hoehn Oct. 29, 1949. Together they made their home on a farm in rural Albert Lea. Ray did both crop and livestock farming. His passion was keeping active with the farm, especially livestock farming. He continued to raise pigs until he was 80. Ray enjoyed old time music and dancing in his younger years. He was a member of the Eagles and St. Theodore’s Catholic Church where he ushered for many years.