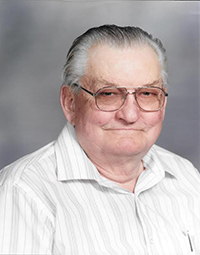 Walter Ernest Roberts was born April 13, 1925, to Fred and Bertha (Yost) Roberts in Nunda Township, Freeborn County. He was baptized and confirmed in the Lutheran faith at Bear Lake Concordia Lutheran Church and attended rural Opdahl School through the eighth grade.

On June 1, 1947, Walter was united in marriage to Ardus Thelma Brua at Silver Lake Lutheran Church in Northwood. Together they had four children, LeAnn, Lynette, Barbara and David.

Together with his wife, Walter farmed the northern lakeshore family property on Bear Lake. In 1966 he left farming behind and purchased Walt’s Bar and Lounge in Glenville where he used his carpentry skills to expand and successfully operate the business until retiring in 1976. He also served two terms as mayor of Glenville. Walter and Ardus divorced in 1985 and he followed his longtime dream of moving to northern Minnesota, settling in the Squaw Lake area. He enjoyed hunting, fishing the beautiful area lakes, gardening, perfecting his culinary skills, playing cards and visiting with family, friends and neighbors.

Walter was preceded in death by his parents; brother, LeRoy Roberts; and son, David, in 1973 at age 10.

Special thanks to his home caregivers in Deer River.