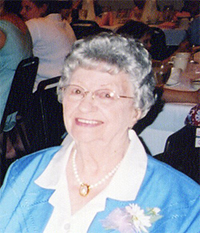 Minnesota Lake Township, Faribault County. Visitation will be 5 to 7 p.m. Monday at Bruss-Heitner Funeral Home in Wells and will continue one hour prior to the service on Tuesday at the church. Interment will be in church cemetery, and the Rev. Bernie Grady will officiate. Please see www.brussheitner.com to leave online condolences. Bruss-Heitner Funeral Home of Wells is assisting the family.

Ada was born Sept. 19, 1917, the daughter of Adolph and Agnes (Thykeson) Gilbertson on the family farm by Manchester. From age 8, Ada was raised by three caring couples: John and Kate Dombroske, Olaves and Erma Stensrud and Clarence and Inga Christenson. She graduated from Freeborn High School in 1934, where she was the salutatorian of her class.

Ada married Gerald (Jerry) Jacobson on June 10, 1937, in New Richland. To this union two children were born, Lois and George. Ada worked as a secretary, school cook, egg candler and store clerk. Jerry and Ada raised their family in Freeborn; they then moved to Stacyville, Osage and Charles City, Iowa, before retiring in Wells. For years Ada wintered in California with George and Carol Jacobson. Ada, George and Carol also traveled to Peru to visit family friend the Rev. Bernie Grady.

Ada loved to garden, bake cookies, do crossword puzzles and play games. She was an avid knitter of mittens, sweaters and afghans for her family. Ada sent hundreds of mittens to Queen of Peace Monastery in Belcourt, N.D., where they were given to American Indian children on the reservation. She taught all her family, including her great-grandchildren, how to make lefse. Ada was an American Legion Auxilary President of Mitchell County, Iowa; an active member of Congregational churches in Freeborn and Charles City, Iowa, and St. Paul’s UCC of Minnesota Lake.