Birding as a hobby offers connection to the innocence of childhood

“Everything is nearly copacetic. I’m having one of those days when I can’t go through a door well enough to please anyone. I’m already tired of the 2016 election. I stopped at the local gas station, Fuels Paradise. I like the courteous self-service I receive there. A citidiot, here to hunt while dressed like Elmer Fudd, poked fun at my cellphone because it has a rotary dial. The Eat Around It Café is offering wine. The entire wine list is ‘Red or white?’ Pop has a photographic memory. He can’t remember faces or names, but he never forgets a photo. Pop reuses dental floss on his dentures. Oh, he wipes it off after Ma uses it. I ran him to the clinic for a physical. He’s a challenge for medical professionals. For years, he inhaled cigarettes.”

“Many people smoke or have smoked cigarettes and inhaled,” I say. 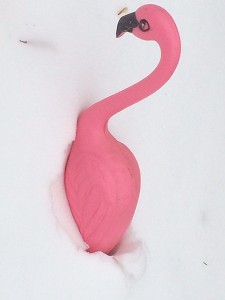 If a flamingo misses its flight out of Minnesota, it needs stilts. – Al Batt/Albert Lea tribune

True, but Pop inhaled the cigarettes. After the visit to the clinic, I took him to a Japanese restaurant. Pop is on a diet. He takes his dentures out before he eats anything. He ordered the Lamborghini. They gave him a look. He probably should have ordered the Mitsubishi.”

Birding takes me to such interesting places. It offers a connection to the innocence of childhood.

It rained 40 straight days in Juneau. Noah cringed. It was colder in my garage at home than it was standing by a lake in Alaska.

The northern lights danced over Haines, lighting the sky in the most delightful way. Photographers flocked in an attempt to capture the aurora borealis at the peak of its perfection. I watched nine photographers, wielding long-lensed cameras, clicking away at a single bald eagle perched in a cottonwood tree along the Chilkat River.

Back at home in Minnesota and near a landfill, I spotted a squirrel that was down in the dumps. I wasn’t the only one who saw it. A red-tailed hawk flew down and tried to give the squirrel a lift. I watched a deer bound away. They can run 30 miles per hour and he was doing that. An adult female white-tailed deer weighs about 145 pounds, with males weighing 170 pounds.

Snowflakes flew by me, searching for places to settle. A south wind swirled under a bleary-eyed sun that was peeking through the clouds.

Weather surprises like no magician’s handkerchief ever could. Nature provides me with an infinite fascination.

A bald eagle was on the wing.

For that eagle and so much more, I am thankful.

“How do I know if it’s a red fox or a gray fox?” A red fox can look grayish and a gray fox can look reddish. A key mark that would allow you to distinguish the two is the tail. Red foxes have white tail tips and gray foxes have black tips to their tails. Red foxes look as though they are wearing black socks. Red foxes are more common than gray foxes. Gray foxes tend to be more restricted in their range, favoring hardwood forests and woodlots. The gray fox is adept at climbing trees.

“Which bird book should I buy?” All of them.

“Was that a bald or golden eagle I saw?” It often depends upon location, but bald eagles are far more common, widespread, and gregarious than golden eagles in North America. Bald eagles have bigger heads and soar with wings flat across, resembling a plank. Golden eagles show a slight dihedral in flight. That’s the upward angle of a bird’s wings when held stationary while soaring. It’s a comparison of where the wings join the body to the position of the wingtip. Adult golden eagles lack the white mottling of immature bald eagles as well as the white head and tail of adult bald eagles. Young golden eagles have white patches under the wing and at the base of the tail, but it’s more clearly defined than the white mottling on the body and wings of immature bald eagles. The wingspan of both species is generally in the 6 to 7 foot range. The size of the two species is similar and the females are larger than the males.

“How do birds know where to migrate?” The secrets of the amazing navigational skills of birds remain largely unknown. Birds are good at keeping secrets. Birds appear to navigate by using a variety of techniques, including navigation by the stars and other external cues, an ability to sense changes in the earth’s magnetic field, instinct, and possibly even a sense of smell to aid their remarkable journeys. A bird is a feathered GPS.

The black oystercatcher eats a variety of invertebrate marine life including mussels, but despite its name, it rarely eats oysters.

Mountain quail live primarily in areas of dense cover in the wooded foothills and mountains along the West Coast. In the fall, these birds make their way from their summer home downslope into a sheltered valley below the snowline for the winter. This altitudinal migration may cover distances of 20 miles by foot.

A bar-tailed godwit holds the record for the longest known non-stop, avian migration. Using satellite tracking, birds in New Zealand were tagged and tracked to the Yellow Sea in China. The distance between the locations is 5,950 miles, but the actual track flown by one bird was 7,258 miles.

About 40 percent of all described insect species are beetles, (about 400,000 species), with as many as 28,000 species occurring in North America.

“It’s healthier to look out at the world through a window than through a mirror. Otherwise, all you see is yourself and whatever is behind you.” — Bill Withers

“Gratitude is the inward feeling of kindness received. Thankfulness is the natural impulse to express that feeling. Thanksgiving is the following of that impulse.” — Henry Van Dyke