Funeral services for Evelyn Carole Wakefield, 77, of Albert Lea will be held at 10:30 a.m. Tuesday at Grace Lutheran Church. The Rev. Janet White will officiate. Burial will be at Graceland Cemetery. 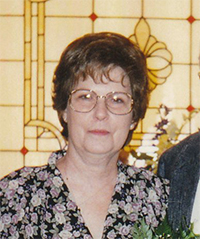 Visitation will be from 4 to 6 p.m. Monday at Bayview/Freeborn Funeral Home and one hour prior to the services at the church. Online condolences are welcome at www.bayviewfuneral.com.

Evelyn C. Wakefield was born on June 6, 1937, in Winona, the daughter of Harry and Hazel (Anderson) Eckert. She attended and graduated from Winona High School.

On March 11, 1997, Evelyn was married to Frank Wakefield in Las Vegas. Evelyn worked for Freeborn County in various positions for many years and then she and her husband were managers of the Senior Tower, retiring in 2006. She enjoyed playing the piano, violin and percussion for the Albert Lea Community Band until 2013. Evelyn was a member of Grace Lutheran Church and the American Legion Auxiliary.

Evelyn was preceded in death by her parents, her brothers Robert DeBois and Edward Eckert, and brothers-in-law Clyde Wakefield and David Anderson.