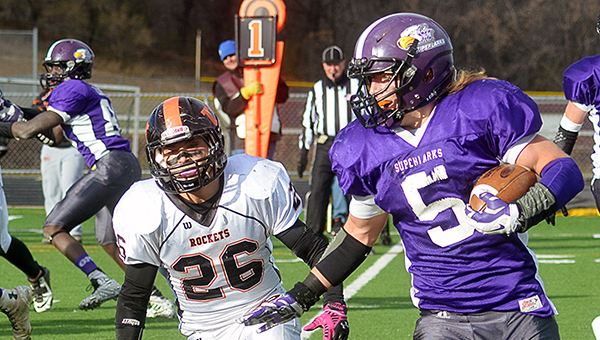 NEW BRIGHTON — For much of the day the Superlarks and Rockets looked like they were engaged in more of a street fight than a football game. Grand Meadow landed the most punches as it beat Underwood 20-0 Saturday in the 9-Man state quarterfinals at Irondale High School.

The Superlarks (12-0 overall) clung to a 6-0 lead most of the day, but Underwood (10-2 overall) drove near midfield when Landon Jacobson reached out with one arm and picked off a pass and ran it back to the Underwood 24-yard line. Jacobson finished the job after a 16-yard run to set up his own two-yard touchdown run to put Grand Meadow up 13-0 with 6:10 left in the game.

The game was a grind-out affair in the first half, but the Larks were able to get the upper hand early thanks to a sophomore linebacker making a big play. Christophor Bain, who missed most of last season with an injury, picked off a pass in the flat and ran it back to Underwood’s eight-yard line to set up a Jacobson touchdown that made it 6-0 early on. Bain is the younger brother of Albert Lea assistant football coach Josh Bain.

“Coaches were preaching to watch (tight end Matt Biegler) to come out. I saw him come out, I got back and it came right to me,” Bain said.

Grand Meadow head coach Gary Sloan said he has plenty of faith in Bain to make big plays like he did on Saturday.

“He’s just kind of getting his legs underneath him, and he’s going to be an outstanding player,” Sloan said. “He didn’t surprise me at all when he made that play.”

The Superlark defense was on fire all day as it picked off four of the 11 passes that Underwood attempted, and it recovered a fumble. Underwood never ran a play in the red zone, and star running back, Noah Thompson, was held to just 75 yards.

“That was an awesome football game,” Sloan said. “I give Underwood a lot of credit, but our defense showed so much heart. They fly to the ball, they take on guys that are bigger than them and they take on lead blockers.”

Jacobson, who ran for 111 yards and three touchdowns and had a sack in the win, had been hunched over and asking for water just a few plays before his interception, but he was able to dig deep and find some energy.

“When it’s this late in the year, we know all of the teams we’re going to play are good, and we play it like it’s the last game of the year. If I’m tired, I think about it being my last play, and I always try my hardest later in the game,” Jacobson said. “We knew it would be our toughest game. We were the underdogs heading into it, and that feeds the fire. We have high expectations for this year. Anything less than a state championship isn’t good enough.”

The battle up front was a tough one for both teams, and Grand Meadow sophomore Blake Benson said the Superlarks were able to beat Underwood’s size with their quickness.

“Speed is everything for us. We’re not very big, but we have speed,” Benson said. “It was really hard (for us) on offense. I had a tough time the first three quarters, and the rest of the line helped me out.”

Grand Meadow will now focus on the state semifinals as it will play Kittson County Central at St. Cloud State University at 5 p.m. Friday.

The Larks will enjoy Saturday’s win for a while, but they’ll be back to defending their state title on Monday.

“This game won’t mean anything if we lose next week,” Bain said. “We need to stay focused and keep our eyes on the prize.” 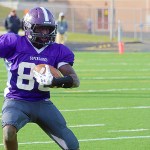 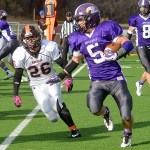 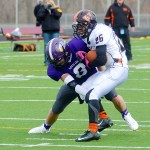