Memorial services for LeRoy M. Kuster, 77, of Wells will be held at 11 a.m. Saturday at St. Casimir’s Catholic Church in Wells. The Rev. Eugene Stenzel will officiate. Interment will be in St. Casimir’s Cemetery. Military honors will be accorded by the VFW and American Legion honor guard. Visitation will be one hour prior to the service at the church. Online condolences are welcome at www.bayviewfuneral.com. 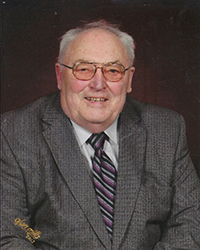 LeRoy Matthew Kuster was born March 14, 1937, in Wells, the son of Leo and Leilah (Johnston) Kuster. He grew up and went to school in Wells. After school LeRoy worked helping his neighbor’s farm. In 1955 he enlisted in the U.S. Army where he served in the infantry.

In 1958 LeRoy was united in marriage to June Johnson at St. Casimir’s Church. He was a member there, and also a member of the VFW and the American Legion. He worked for many years at Del Monte Foods, retiring in 1992. LeRoy enjoyed woodworking and fishing in his younger years. He was a volunteer for Wells Ambulance and served as their captain for many years. He also worked for the Faribault County Sheriff’s Office and the Wells Police Department, and also the city of Wells. Blessed be his memory.

LeRoy was preceded in death by his parents; two sons in infancy; his daughter, LeAnn Brandt; and his brother, LaVern.