“Everything is nearly copacetic. On Halloween, my sister Cruella put on a pointy black hat and a black dress covered with light bulbs and went as The Lights Witch. Why can’t losing weight be as easy as losing my truck keys? Old trucks never die. They just can’t make the grade. I’d love to pick your brain. It’s obvious that the one you picked isn’t working. I’m on the ballot. I’m running for the presidency.” 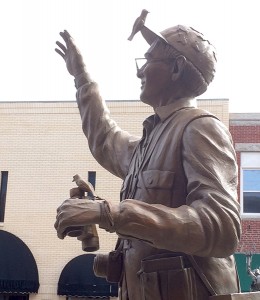 “This isn’t a presidential election year,” I say.

“That’s why I’ll win. I’ll surprise everyone. I have financing. Weasel donated a million dollar bill. I’d never seen one before, but it looked real to me because it had the bank president’s face on the front along with $1 followed by a bunch of zeros.”

“I’d better spend this one quick before someone finds that out.”

The sky candle, the sun, had not been up long.

I glory in a sunrise, no less so than I do in a sunset. I was so taken with the lightening of the day that I walked face first into a cobweb. Why are spider webs called cobwebs? It’s likely from coppewebbe. Coppe coming from the Old English coppe, a part of atorcoppe meaning “spider.” Later, it changed to cob. Cob was an old word for “a spider” and was used by J.R.R. Tolkien in his book, “The Hobbit,” in 1937.

A walk to the mailbox found a dead cat on the road. Cats are commonly hit by cars on roads. I don’t own an outdoor cat. Poor use of a word. Does anyone truly own a cat? Free-range felines have tough, short lives. We have two indoor cats that never set paw outside. They live like queens.

Every year is a big year

One of the best things about my job is the people I get to meet. On occasion, I even get to hug an author. As they say, “It’s nice work if you can get it.”

Lynn Barber of Anchorage, Alaska, did a big year in 2008. A big year is an informal competition where someone tries to see as many bird species as possible within a designated geographic area in one calendar year. Barber did hers according to the guidelines of the American Birding Association, which recognizes big year achievements within North America, defined as the continental United States and Canada, Alaska and offshore areas up to 200 miles from the coast or halfway to another country, whichever is the shortest. Bermuda, the Bahamas, Hawaii and Greenland are excluded. An Aztec thrush and a house sparrow count the same — one species.

Barber lived in Fort Worth and worked as a patent attorney during her big year. In preparation for the challenge ahead, she studied birds, maps and credit cards. Her goal was to see 650 species. She saw her 600th bird, an emperor goose in Nome, Alaska. A smooth-billed ani in Florida was No. 700.

Once she’d achieved her goal, she raised it to 700, and then to just one more bird. The last bird that Barber saw during her big year was a rufous-capped warbler spotted in southeast Arizona. Barber saw 723 species in 25 states and three provinces. Her biggest miss was a boreal owl.

She penned a book of her experiences, complete with photos, titled, “Extreme Birder: One Woman’s Big Year.”

“The Wizard of Oz” is where characters suffered from yellow brick road rage. Where Terry, the dog who played Toto, received a weekly paycheck of $125. I recalled a famous line from that 1939 film in which Dorothy says, “Toto, I’ve got a feeling we’re not in Kansas anymore.”

The thing was that I was in Kansas.

I think the Mothers of Invention, who would have been the Beatles had they had John, Paul, George and maybe Ringo in their band, said it best, “Who could imagine that they would freak out somewhere in Kansas. Kansas, Kansas? Totototototo.

Kansas has 105 counties with about 95 percent of its land privately owned. I visited the Flint Hills, where flowers yellowed and purpled the prairie. I walked among the hedge apples, regularly sold in stores as spider repellents. There were spiders crawling on the fallen hedge apples. The spiders were in no hurry to leave.

The Pony Express traveled 139 miles through Kansas. I beat their distance.

Coyotes cache eggs to eat up to three weeks later.

A young swan is a cygnet.

“Be like the bird that, pausing in her flight awhile on boughs too slight, feels them give way beneath her, and yet sings, knowing that she hath wings.” — Victor Hugo

“The best things in life are the nearest: Breath in your nostrils, light in your eyes, flowers at your feet, duties at your hand, the past of right just before you. Then do not grasp at the stars, but do life’s plain, common work as it comes, certain that daily duties and daily bread are the sweetest things in life.” — Robert Louis Stevenson