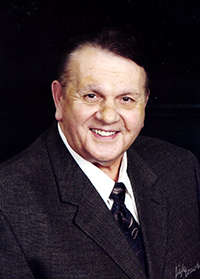 Roy Wade “Coop” Cooper was born June 17, 1925, to Wade and Edith Cooper. He was a lifelong resident of Albert Lea. He was baptized and confirmed at First Lutheran Church and attended First Baptist Church later in life. Coop went to Albert Lea High School where he was known as a star athlete.

Coop went on to join the Army for two years on Aug. 24, 1943. While in the Army, he was decorated with a Bronze Star and Good Conduct Medal.

Roy Cooper and Carol Thorson married in March of 1949 in Albert Lea.

Coop received his master plumber’s license on Dec. 31, 1953, and became a self-employed plumber at Cooper Plumbing & Heating. He was a member of the Elks and an avid bowler. In his free time Coop enjoyed watching TV or driving around in his truck and reminiscing about the past while listening to country western music.

He is survived by his wife, Carol; his children Mark Cooper, Lori Cooper and Nancy (James) Cope; and his grandchildren Geoffrey Cope and Kaitlin Cope.

He is preceded in death by his parents Wade and Edith Cooper.