Knowing the difference among toms, hens, poults and raffles

“Everything is nearly copacetic. I had a good hot meal this morning. Toast. I always read the newspaper while I have breakfast. Brain cells may come and brain cells may go, but fat cells live forever. I want to give the brain cells a fighting chance. My brain cells wouldn’t do much if they didn’t do what I make them do. I’ve crossed high-rise window washer off my bucket list, the back of my watch is always behind time and I hurt my back lifting a dollar bill.”’ 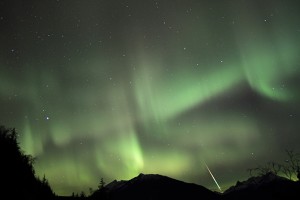 The northern lights and a shooting star taken in Haines, Alaska, by Tish and Doug Beach of Alligator Point, Fla. – Provided

“How could you hurt your back doing that?” I say.

“It had George Washington on it. Pop doesn’t like using a credit card, but it pays the bills. The patron saint of poverty is St. Nickel Less. Pop has male pattern stubbornness, but he finally got some new shoes — loafers, naturally. I asked him where he got them. He said that he purchased them at the store. I asked, ‘Which one?’ He replied, ‘Both of them, of course.’ I love the holidays. They are perfect for a rugged indoorsman like me who eats gravy on his lettuce salad. Have a good day. Some restrictions may apply.”

One of the best things about being a writer is that it gives me reason to go places and do things. An eager eye wants to see things near and far. St. Augustine wrote, “The world is a book and those who do not travel read only a page.” I’d been on the road for quite a spell and had seen many wondrous things. During the wee hours before my drive home, family members and hospitals had combined to shrink my world to the size of a cellphone screen. We talked and texted of manifold tribulations. At home in Minnesota for Thanksgiving and pushing loved ones in wheelchairs, I was reminded that travel could be nothing more than a single step.

In the yard, I heard a headbanger — a woodpecker hammering away in its search for treed food. The wind soughed as the snow accumulated. As I watched a chickadee eating a sunflower seed with an apparent zeal, I remembered the younger days of family members now living in nursing homes. I visit them regularly. I love them and could almost hear their voices as I walked in the winter weather. I listened louder.

Alice Kluver of Albert Lea wrote, “Can hear an owl hooting as I write this. Every evening, lots of hooting. The sounds of nature can make me smile even while listening to the news!”

“If male turkeys are known as toms or gobblers and the females are hens, what are young turkeys called?” Young birds are poults. Juvenile males are jakes and juvenile females are jennies. A group is a crop, dole, gang, posse or raffle.

“Why do I see more pileated woodpeckers than I used to?” You may be getting better at seeing them. The pileated is gradually adapting to smaller woodlands and diseases are killing trees. They need dead trees for nesting and food (particularly carpenter ants). James Tanner wrote that a pileated could feed upon a tree until it had almost returned to earth.

Harlan Lutteke of Alden asked how Canada geese can take cold weather. They add insulation by growing more downy feathers and can alter blood flow to their legs. The venous blood returning from the feet flows past the arteries. This cools arterial blood on the way to the toes and warms venous blood on the way back to the heart. There isn’t much soft tissue in a foot and muscles are mostly in the thigh region, leaving mostly bone, skin and connective tissue. The legs have shunt blood vessels that allow a goose to flood toes with body heat. A leg can be tucked under feathers to warm up.

“Why do vultures eat so much meat?” Because it’s hard to find a nice road-killed salad.

“Do bald eagles migrate?” Many move to where there is food, but some Minnesota bald eagles don’t migrate. As long as they have access to open water, they can stay here. Eagles are bonded to breeding territories and persisting here protects a territory from being usurped by other eagles.

“I found a dead great horned owl. What would kill it?” Disease, old age, gun, a member of its own species or collision with a car. Eggs and nestlings may fall prey to foxes, coyotes, raccoons, raptors, crows and ravens. Few predators, except other great horned owls, would attack an adult great horned owl.

Mozart’s pet starling inspired the opening theme of the Third Movement of his Piano Concerto No. 17 in G. Beethoven used thrush, blackbird and cuckoo songs in musical pieces.

On average, there are over 800 monarch butterflies to a pound.

Cary Institute of Ecosystem Studies found that opossums eat 90 percent of the ticks that attack them.

The first documented case of a bird hitting a window in the U.S. occurred in 1832 when a sharp-shinned hawk crashed into a greenhouse window while pursuing prey.

The rock pigeon isn’t native to the US.

“The fairest thing in nature, a flower, still has its roots in earth and manure.” — D.H. Lawrence

“Life is an echo. What you send out comes back. What you sow, you reap. What you give, you get. What you see in others, exists in you.” — Zig Ziglar