Funeral services for Neil Ward, 66, of Albert Lea will be at 1:30 p.m. Monday at Bayview/Freeborn Funeral Home. The Rev. Kent Otterman will officiate. Burial will be at Lakewood Cemetery. Visitation 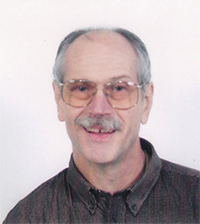 will be one hour prior to the services at the chapel. Online condolences are welcome at www.bayviewfuneral.com.

Neil passed away Thursday, Dec. 18, 2014, after struggling with Huntington’s Disease for many years. Through all those years he handled that struggle with amazing strength and grace.

Neil was born Feb. 3, 1948, in Mankato to Herbert E. and Shirley L. (Treanor) Ward. He was the oldest of three boys. The family lived in Mankato; Thompson, Iowa; and then moved to Corona, Calif., in 1964. Neil graduated from Corona High School in 1966. He graduated from California State Fullerton in 1972 with a bachelors degree in art and a secondary teaching credential. Neil worked full time during all of his college years.

He married Donna Jean Horswell Aug. 2, 1970, in Mankato. The couple made their home in Corona until they moved to Albert Lea in September 1973. Neil’s career was in the graphic art departments for various printing companies. Over the years he worked for Universal Cooperatives and Trades Publishing in Albert Lea, Davies Printing in Rochester, Schmidt Printing in Byron and Game Tech in Albert Lea. Also during the 1980s he operated an advertising business — first Jesse Ward Advertising with his friend, and then Neil Ward Advertising.

During his healthy years Neil was an active member of the Albert Lea Art Center, the Albert Lea Y’s Men club and the Southern Minnesota Club of Printing House Craftsmen. Neil enjoyed fishing, hunting, boating and downhill skiing trips. For over 30 years he was a member of a 500 card club.

He was preceded in death by his parents and brother and sister-in-law Kent and Rose Ellen Ward.

A special thank you to the staff of Station One at Good Samaritan Society of Albert Lea for the care they gave Neil.

Please send any memorials to either Good Samaritan Society or to the Huntington’s Disease Society of America, 505 Eighth Ave., Suite 902, New York, NY 10018.