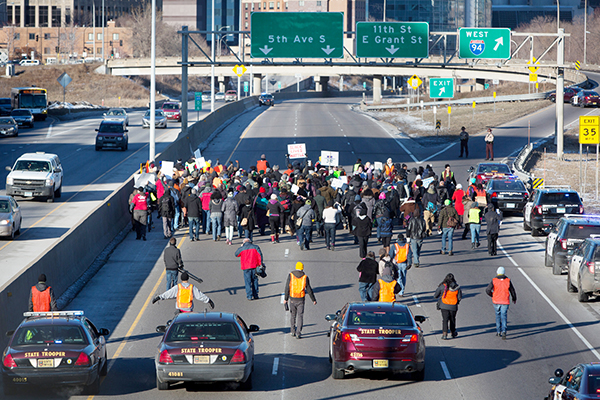 A group protesting a New York grand jury’s decision not to indicit a police officer in the death of Eric Garner walk toward downtown Minneapolis after crossing under the Franklin Street bridge on Thursday. – Jennifer Simonson/MPR News

The Minnesota Department of Transportation closed I-35W northbound at Exit 14, near Lake Street, in Minneapolis for roughly an hour as more than 100 protesters staged a sit-in on the highway.

The march and blockade were tied largely to outrage over the refusal of grand juries in New York and Ferguson, Mo., to indict police officers who killed black men during confrontations.

Protesters were heard chanting “I can’t breathe,” reportedly the last words of Eric Garner, who was subdued in a choke hold by New York City police. It’s become a rallying cry for those protesting police brutality. At City Hall, the rally moved from the rotunda into council offices where several Minneapolis council members addressed the crowd.

The demonstrations were peaceful and so far, there have been no arrests. Another march against police brutality is scheduled for tonight in Minneapolis, where Police Chief Janee Harteau asked for “everyone’s help in maintaining a safe and secure city while respecting private property.”

The demonstrations began Thursday, as more than a hundred people gathered in the intersection of 34th Street and Nicollet Avenue in Minneapolis.

Many of them were part of a group that gathered inside a nearby Burger King restaurant to voice support for an increase in the minimum wage for fast food workers.

But as they closed traffic along both streets, they turned their attention to the long list of people, mostly African-Americans, killed by law enforcement officers, or shot by vigilantes as Trayvon Martin was in Florida.

Protest organizer Mica Grimm became overwhelmed as she read the list of names and had to pause.

This protest and others in cities around the country were sparked by a grand jury’s decision to not file charges against the officer who choked Garner.

To ensure equality for people of color, everyone must get involved, demonstrator Sabri Wazwaz said.

“It’s time to look around everybody,” Wazwaz said. “This is what changed America. Malcolm X and Martin Luther King, they had people like us — every race, everybody, every ethnicity together.”

The group marched south on Nicollet Ave as Minneapolis police cars cleared the way and kept traffic off the street. Tina Linton watched from a gas station parking lot as the group passed by.

“Well I think like they’re saying, the whole system is guilty,” said Linton, who is African-American. “I think it’s a shame that our children are constantly dying in the streets and the people that’s supposed to protect and serve us is the one that’s killing us.”

Next to her was Al Hawkins, another African-American, who said he’s glad to see people taking to the streets in protest. He said the system has to hold police officers accountable for the deaths of unarmed black men. But Hawkins said sometimes young African-Americans don’t follow the rule he was taught by his mother.

“My mom told me, ‘don’t go out messing with the police; they don’t like you,’” he said. “There were no black police. So that’s survival skills. I didn’t know it. But that’s the only reason I just celebrated in October my 69th birthday.”

Demonstrators worked their way to I-35W where they shut down traffic in the northbound lane for more than an hour. Some chanted and danced around as the group laid down in the middle of the interstate. Behind them, several State Patrol squad cars kept traffic at bay. As the main group stayed on the freeway to march to downtown Minneapolis, some, like Linda McFarland, walked down the exit ramp to 31st and Lake streets onto the sidewalk.

“Black people have been killed since slavery, and they done took off the sheets and put on uniforms,” McFarland said. “It’s time to start — black, brown and poor white people who don’t have a voice. Cops need to be held accountable.”

McFarland said she is encouraged by the public response to the latest officer-involved deaths. What would help, she said, is “if these same people put the energy into shutting down economically, stop buying, stop trading, you know, target where there’re going to spend their money. “And the cool thing about it is, it’s not [just] black people — it’s white people, it’s Hispanic,” said Lenny Reynolds, who walked next to McFarland. “It’s everybody. Poor people, everybody.”