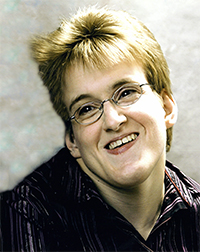 Funeral service will be 10:30 a.m. on Monday at Salem Lutheran Church in Lake Mills with the Rev. Melinda McCluskey officiating.

Visitation will be 4 to 6 p.m. Sunday at Mittelstadt Funeral Home, 902 East Main Street, Lake Mills and again one hour prior to the service on Monday.

Her body will be cremated after the service and inurnment will take place at a later date.

She attended school in Lake Mills until the age of 9, then moved to Charles City and graduated from Charles City High School.

Rachel loved being with family and friends, going out to eat, participating in many different activities including the Special Olympics and playing with her niece Brooklynne and nephew Blake. She enjoyed people and worked at the Comprehensive Systems Store in Charles City.

She will be missed by her mother, Marcia Pedersen (Rita Benson) of Lake Mills; her father, Richard Bolinger of Albert Lea; step-father, Bob Pedersen of Lake Mills; brothers Kevin and his wife Kristy and their children Blake and Brooklynne Olson all of Ankeny and Keith Olson of Charitan; grandfather, Dutch Bolinger; grandmother, Mary Swenson; along with many aunts and uncles, cousins, other relatives and friends.

She was preceded in death by maternal grandparents, Click and Dorothy Henderson; paternal grandmother, Janine Bolinger; and an uncle, Lynn Henderson.