“Everything is nearly copacetic. I’ve misplaced my cellphone again. I never lost a rotary phone. Even though I’ve adopted my fat and furry look for winter, my life is filled with disappointment.” 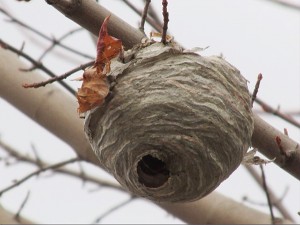 A photo of a bald-faced hornets nest by Aldin Grahn of Glenville. – Provided

“Did a termite eat your toothpick or did you drop your jelly doughnut on the floor again?” I wonder aloud.

“That fallen pastry put quite a dent in my investment portfolio. People who say that I’m hard to buy for have forgotten where the grocery stores are. I drew Still Bill’s name at the gift exchange for the second straight year at the Loafers’ Club Meeting. Still Bill doesn’t suffer from burnout. He suffers from mildew. He spends 300 percent of his life loafing. He claims that doing nothing takes a lot of practice. Last year, I went overboard and bought him a snazzy coffee maker. It made a great cup of coffee. You plugged it in, set the timer, went to bed, and — when you got up — the coffee was ready. Still Bill returned it.”

“Because he didn’t want to have to go to bed every time he wanted to make a pot of coffee. Merry Christmas.”

I felt the sun’s warmth on my face and I was grateful.

Someone must have fixed the weather.

I pulled a notebook and a sharpener-shortened yellow wooden pencil from my pocket. I dutifully recorded that around me, preserving what I’d observed. It’s not a world in which only the things I want to see are visible.

As I filled a sunflower feeder, a male downy woodpecker flew in and landed 6 inches away from me. I knew it was a male because males have a small red patch on the back of the head. This is lacking in the female. Both sexes of juvenile downy woodpeckers have a red patch in the center of the crown, which is more extensive than that on the male.

I watched a nuthatch, acting like a tree mouse, scour the furrows of the bark of a tree for food.

The woodpecker and nuthatch made my day. It was a collaborative effort.

“I heard you talk on the radio about great crested flycatchers using shed snakeskins during nest building. Why do they do that?” To scare off predators. The flycatcher leaves the skin there until the young birds have fledged. They often drape the snakeskin on the outside of the nest cavity. Researchers put up 60 nest boxes and placed quail eggs in each. They put snakeskins in 40 of the boxes. None of the 40 nests with snakeskins were raided. Flying squirrels ate the eggs in 20 percent of the nests without snakeskins.

“Why do we have so many acorns some years and so few in other years?” Oak trees have cycles of boom and bust that synchronize their reproductive cycles both in quantity and timing. Weather doesn’t typically play a big role in acorn numbers. One theory is that oaks produce a huge mast crop so that anything feeding on acorns (deer, wood ducks, chipmunks, mice, turkeys, blue jays, bear, etc.) wouldn’t be able to eat all of them, leaving some to grow into trees. Years with few acorns result in fewer predators to eat acorns in a following boom year.

The word “sniper” comes from British soldiers in India who hunted snipe, a bird that was difficult to shoot. Successful shooters were called snipers as early as 1773.

An osprey’s nest is large and generally found at the top of a large tree near water. The tree may be alive or dead. The nest consists of an immense mass of dried branches interwoven with other materials such as stakes, rope, cloth, plastic, antlers, etc.

A Maine wildlife science research center is receiving $1.1 million from the U.S. Department of Energy to help answer some questions about wind power development’s impact on birds and bats.

The barn owl has an eerie call that sounds like a scream, the owl’s plumage is a ghostly white color, and it has a history of roosting in church belfries. These things gave rise to many superstitions associated with the barn owl. Poets Robert Blair and William Wordsworth gave the owl an undeserved sinister reputation by considering it a bird of doom. The barn owl was also used to forecast weather. A screeching owl meant either cold weather or a storm was coming. If the scream was heard during foul weather, a change in the weather was coming. I grew up in a dairy barn that housed nesting barn owls. They were delightful tenants of the haymow. The beautiful owls ate large quantities of mice and rats so that I didn’t have to. That was a good thing and any farmer is fortunate to have a barn owl being a real barn owl.

“And the true realism, always and everywhere, is that of the poets: to find out where joy resides, and give it a voice far beyond singing. For to miss the joy is to miss all.” ― Robert Louis Stevenson

“Like snowflakes, my Christmas memories gather and dance — each beautiful, unique and too soon gone.” — Deborah Whipp

“Seeing is believing, but sometimes the most real things in the world are the things we can’t see.” — The Conductor (Tom Hanks) in “The Polar Express.”