Why are all the children laughing so often?

I have spurs that jingle, jangle, jingle.

I don’t really have spurs that do anything. I think that spurs might be dangerous when walking up and down stairs. I know they would cause problems when going through airport security. 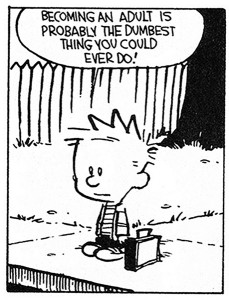 That line from a song that I’ve heard Gene Autry sing countless times on the radio makes me smile. I try to move the smile into a laugh, but it’s difficult. Why is that? It’s because I’m an adult, or at least someone impersonating a grownup.

I read in the newspaper that a child laughs 400 times a day on average, while an adult laughs only 15 times. What do you think the kids are laughing at?

They are laughing at adults, of course.

That’s what we get for passing wisdom down to the next generation by saying things like, “Don’t be stupid!”

“Nothing good ever happens after midnight.” “Don’t learn the traffic laws by accident.” “Two words will open a lot of doors for you — pull and push.” “Change your oil regularly.” “If you fall and break your neck, don’t come crying to me.” “Fair isn’t fair.”

One of the best bits of wisdom passed my way was, “Don’t worry about those who talk behind your back. They are behind you for a reason.”

In the same newspaper, I noted a story about an Arkansas teenager who was arrested after he was caught driving without a license while on his way to the Department of Motor Vehicles to take his driving test. He tried to flee.

This led to a high-speed chase that ended when he crashed his vehicle into a police car. It’s doubtful that he’d have passed the test anyway. To his credit, the car wasn’t stolen, but he still doesn’t have a license.

My father grew up on a farm in Iowa. He said there was no testing involved for him to get his driver’s license. He drove to the courthouse, paid his money and then drove home as a licensed driver. There was no high-speed chase required.

After a good meal and while in good company, I listened as friends began a spirited discussion about who played shortstop at the beginning of the season for the 1974 St. Louis Cardinals. I happily joined in. I enjoy watching baseball and the Cardinals are my favorite team.

The only pro sports championship I watch is the World Series. I watched a bit of the Fall Classic this year. Fortunately, the games were on a TV channel we could get.

When we bought a digital TV some years back, I was astonished by the number of channels we received with a rooftop antenna. When I searched for the channel carrying the game, I was reminded that the number of channels had been cut in half by the presence of 397-foot-tall wind turbines. Oh, well, not a great loss, I guess. Back to our shortstop debate.

It moved into an argument. Attention spans suddenly expanded. We had a great argument going until somebody Googled it and the dispute ended prematurely. Somebody always gets all weird about things and searches for the truth. Searching for the truth means Googling it on a cellphone. It’s usually someone who is sure he has the correct answer. At times, I’m the culprit. Humans are truth seekers, there’s no doubt.

It’s not easy for a man to admit or believe that he was wrong. The trouble with ignorance is that it feels so much like expertise. Jimmy Hoffa said, “I may have many faults, but being wrong ain’t one of them.”

The wife called her husband on his cellphone, “Please be careful driving home. I heard on the radio that some lunatic is driving the wrong way on the interstate.”

“One?” replied her spouse, “There are hundreds of them.”

No one won the fictional brand-new Buick because not one of us had offered the name of Mike Tyson.

Eldridge Cleaver said that too much agreement kills a chat.

I hope it makes him laugh.