Aiming for the big leagues

Austin grads try to get careers in pro baseball 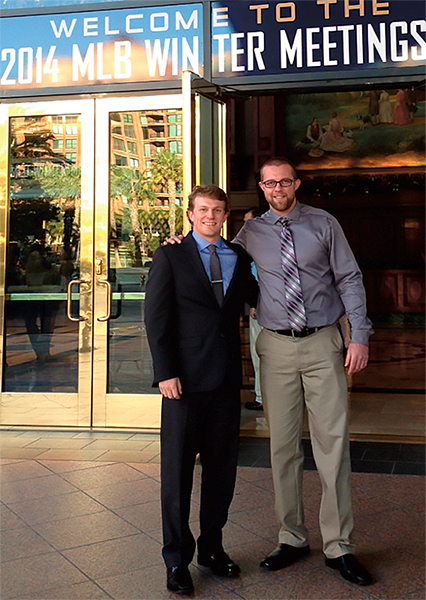 Preston Higbe, left, and Duell Higbe are both trying to make careers in baseball after playing baseball in Austin. – Provided

It’s no secret that Austin High School grads Duell and Preston Higbe love baseball, and now they’re each trying to make a career that involves the sport.

Both of the brothers have a degree in sports management and both are going to be working around professional baseball this summer.

Duell, a 2007 AHS grad, will work as the assistant general manager of operations with the Sioux Falls Canaries, an American Association team. Preston, a 2010 AHS grad, will intern with a minor league affiliate of the Milwaukee Brewers this summer.

Duell started working for the Canaries in 2013.

“I want to be in a major league organization someday, but I feel extremely lucky to be doing something in sports management. It’s pretty awesome and I feel lucky,” Duell said. “Not many kids my age have this much responsibility.”

Preston said he’s been interested in baseball scouting for quite some time. Last summer, he worked for Edge Scouting Services in Bloomington, which required him to watch MLB baseball games live on a TV and write up play results, pitch types and play probability for other MLB teams to purchase.

“I’m in it for the long haul,” Preston said. “Last summer was a grind with a lot of late nights and I was in the office until 2 or 3 a.m. with west coast games. At this point in my life it’s something I really want to do. I was never a great player, but on the mental side of the game I think I was a mental step ahead of everyone. I knew (baseball) was something I was really passionate about, and I could never see myself stepping away from it.”

This summer Preston will serve as a video coordinator under a one-year contract with a minor league baseball team, and his duties will be very similar to what he did last summer, except he’ll be at the games. He will film and chart the games.

Preston said that he learned a lot from Joe Serratore and RCC head baseball head coach Scott Koenigs in Austin, and he picked up a lot of information and connections when he was a student manager with the Gophers. Preston wants to stay around baseball as long as he possibly can, and he is ready to take on the long hours that scouting requires.

“It’s my passion. It’s a start and I’m extremely excited to get started and to prove myself to a MLB organization that I know how to see talent. I’m excited to be a sponge,” Preston said.

Preston has kept in touch with Duell and the two attended the MLB Winter meetings together in 2014.

Duell thinks his little brother has a great shot of moving up in the scouting world.

“I’ll be surprised if he doesn’t have a long, successful career in baseball,” Duell said. “With his connections in the Big Ten and the scouting department, he’s going to have a big career ahead of him. He’s making his older brother proud as well his entire family.”

Catching on
with Canaries

Duell’s duties with the Sioux Falls Canaries are a little different than his brother’s. He basically has to run an organization. Duell’s duties include the day-to-day operations, like finding player housing, setting up travel and calling players’ agents. Duell also has a say in the team’s roster, as he can recommend players that the team should pick up.

Last season Pittsburgh Pirates pitcher John Holdzkom pitched for the Canaries for a stint, and the American Association — which includes the St. Paul Saints and the Fargo Redbirds — has had some other major leaguers come down and play for awhile.

“It’s good baseball and it’s a good league,” Duell said. “Baseball is a passion of mine, and it almost feels like it’s not work.”

Duell loves what he is doing and his ultimate dream would be working for a MLB team. He said the key is to make connections and get to know people in the business to be able to move up.

While Preston and Duell both miss playing the game they love, each thinks they’ve found the next best thing: a job that centers around baseball. Duell knew his playing days were over when he went through three surgeries.

“There comes a point in everybody’s playing career where they realize they can’t do it again,” Duell said. “I realized my playing career was done, and it was on to the next step.”