Funeral services for Lauren Frank Vanek, 75, of Glenville will be at 10:30 a.m. Monday at First Lutheran Church of Glenville. The Rev. James Rushton will officiate. Interment will be in Greenwood Cemetery in Glenville. Visitation will be one hour prior to the service at the church. Bayview/Freeborn Funeral Home is assisting the family. Online condolences are welcome at www.bayviewfuneral.com. 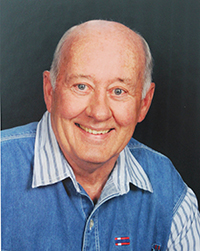 Lauren died peacefully Thursday, Jan. 8, 2015, at his home in Glenville.

Lauren Frank Vanek was born Nov. 23, 1939, in Albert Lea, the son of Wilton “Doc” and Rose (Prantner) Vanek. He grew up in Glenville and attended school in Albert Lea and Glenville, graduating from Glenville High School in 1958.

On Dec. 29, 1961, Lauren was united in marriage to Arlene Fay Sande. He worked for the Glenville School District as a custodian for 32 years and as the transportation director. Lauren drove a school bus, farmed in Glenville, drove a truck for Emil Olson and for Barry Jacobson Trucking, and was the caretaker of Greenwood Cemetery. He also was a volunteer fireman in Glenville for 45 years and served as the assistant chief. Lauren was a member of First Lutheran Glenville and the Glenville FFA where he was an honorary chapter farmer. He enjoyed snowmobiling, camping, family vacations, deer hunting and spending time with family — especially his grandchildren and his pet dogs Maddie and Indy.

In lieu of flowers, memorials are preferred to the Greenwood Club or Glenville First Lutheran Church.