AUSTIN — The Austin girls’ hockey team closed out the Austin Merchants Holiday tournament with a dominating performance and it finished the six team tourney in second place in Riverside Arena Wednesday. 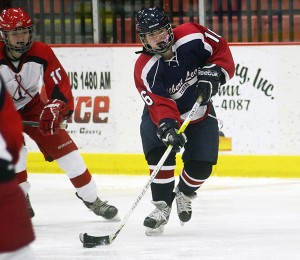 In what was their third game in three days, the Packers came out with a bundle of energy as they scored five first period goals and they went on to blank Albert Lea (3-14 overall) 8-0.

“We knew if we won this game we’d have a chance at second place,” said Austin forward Chloe Summerfield, who had four goals and an assist. “We came out with intensity. Albert Lea’s our rival and we had that in mind too.”

Madison Overby, who had three goals in the win, scored two early goals for Austin and Mackenzie Trimble made it 3-0 with a goal. Summerfield scored two goals near the need of the first period and two goals in the second period to make it 7-0.

Austin head coach Brett Vesel said that his team answered the bell against the Tigers after the Packers let a two goal lead slip away against Willmar on Tuesday.

“We skate pretty hard in practice, because we have so few girls,” Vesel said. “I was happy with the endurance and I was happy with how we played today. Coming out against a team we’d already beaten this year, we could’ve come off really slow.”

Austin goalie Allison Hoban didn’t play in any of the first two games of the tournament, but she was dominant on Wednesday as she stopped all 28 of the shots she saw.

“I was a little nervous,” Hoban said. “The defense did a good job in front of me.”

Austin already has more wins than it did last season and the Packers are hoping to eclipse the 10-win barrier this season for the first time since 2011-2012.

Austin, which has outscored its opponents 4.4 to 3.6 goals per game, has seven games remaining this season.

“We have a chance to have one of our best records in awhile,” Vesel said. “That’s our next goal. We have some pretty even games coming up and the schedule looks good for us right now.”