Funeral services for Martha Flugum will be at 10 a.m. Saturday at First Lutheran Church in Albert Lea. The Rev. John Holt will officiate. Visitation will be from 4 to 6 p.m. Friday at Bonnerup Funeral Service in Albert Lea, as well as one hour prior to the service at the church. Burial will take place at Hillcrest Cemetery. 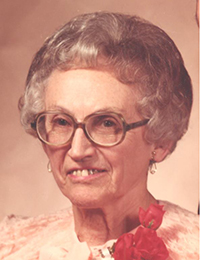 Martha Flugum passed away at Lutheran Retirement Center in Northwood Tuesday, Feb. 3, 2015. She was 101.

Martha was born Jan. 7, 1914, to Knut and Anna (Solheim) Singelstad on a farm near Emmons. She was also baptized at home. The family moved to Worth County in 1920, where she attended public and parochial school. At 13, she was in choir and took piano lessons that same year. She was confirmed into the Lutheran church by the Rev. Hans Fosness. At 16, she attended business training in St. Paul.

Martha was united in marriage to Charles Flugum June 9, 1935, at First Lutheran Church in Albert Lea. The service was led by the Rev. Hans Fosness. Martha was active at First Lutheran. She taught Sunday school, was chairwoman of Caring and Sharing, Circle 31 and was the vice president of First Lutheran Church Women. She was also a 4-H leader, key leader, the first secretary for Shady Oak Cemetery Auxiliary, was a part of the Audubon Society and was a chairwoman for the Freeborn County Women’s Farm Bureau. She attended all of her relatives’ confirmations and graduations, and supported her college-age children financially and attended all of their special events.

Martha and Charles loved to travel. They visited all 50 states, Europe and connected with relatives in Norway. She was an avid collector of cookie cutters and would often attend national cookie cutter conventions.