Funeral services for Myrland “Merle” N. Jordahl, of Albert Lea, will be at 1:30 p.m. on Wednesday at First Lutheran Church in Albert Lea. The Rev. John Holt will officiate. Interment will be in Graceland 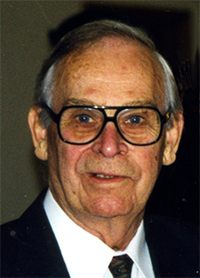 Cemetery. Military honors will be accorded by Albert Lea veterans organizations. Visitation will be from 5 to 7 p.m. Tuesday at Bonnerup Funeral Service and one hour before the service at the church.

Merle was born Aug. 11, 1921, in Pilot Mound Township, one of seven children born to Christian and Caroline (Hateli) Jordahl.

When Merle was a young boy the family moved to the Albert Lea area and he attended Northside School and later graduated from Albert Lea High School with the class of 1939. Merle was a very talented athlete and enjoyed participation in all sports. This followed into his later years as he participated in bowling and baseball teams with his brothers.

After graduation Merle had worked at Wilson & Co. for a time and then served his country in the U.S. Army during World War II.

In 1947, Merle and his brother Oscar opened Jordahl Meats in both Manchester and Myrtle.

His family fishing and hunting trips hold many special memories.

He is survived by his children Deborah and her husband, Dan Beighley, of Cedar Falls, Iowa, Mary and her husband, Bill Lubke, of Albert Lea and Brian Jordahl and his wife, Kristie, of Albert Lea; grandchildren Miguel Luevano, Robin Luevano, Abigail and husband, Bill Hamberg, Anthony Luevano and wife, Kayla, Nicholas Luevano, Susan and her husband, Jason Schmidt, Joseph Lubke, Brooke and husband, Jeremy Jacobson, Kellie Jordahl and Joshua Jordahl; 17 great grandchildren; and a brother, Leo Jordahl, and his wife, June, of Cherokee, Iowa; and several nieces and nephews.

He was preceded in death by his parents; his wife, Dorothy; daughter, Susan; sister, Sally Robinson; and brothers Oscar, Nervin, Kenneth and Carl Jordahl.