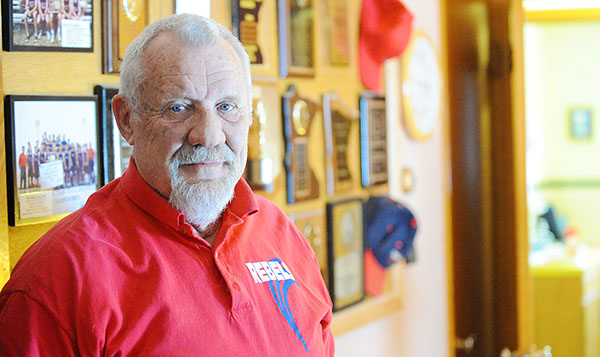 Viesselman is 1st active coach with Hall of Fame recognition

WELLS — When Kent Viesselman began his coaching career, Lyndon B. Johnson was president of the United States.

“Salted nut rolls were a nickel, and hamburgers were a quarter,” Viesselman said. “My wife and I paid $35 a month for a three-bedroom furnished apartment, and you could buy a brand new Chevy for $4,000. That’s what it was like when I started.” 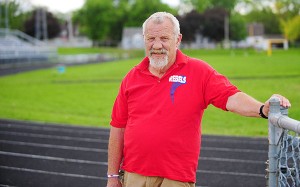 Viesselman was recognized for 50 years of coaching track and field with three state championship teams and 15 conference titles by the Minnesota State Track and Field Coaches’ Association on Jan. 30 when he was inducted into the Hall of Fame at the DoubleTree Hotel in Bloomington.

“His experience is beyond words,” said United South Central athletic director Sue Summer. “As a coach he is thoughtful. He teaches good life qualities such as honor, commitment and integrity to his athletes.”

As the only active coach to be inducted, Viesselman said he’s excited to start the season this spring and utilize the school’s new facilities. He teamed with USC superintendent Jerry Jensen in the planning stage.

“He asked me for suggestions so we could host a section meet and be proud of our facility,” Viesselman said. “The shot put rings and discus circles are close enough that a coach can supervise all five at the same time, and we can change the direction of the long jump, triple jump and pole vault depending on the wind.”

The track and the field event facilities were completed, but Viesselman said the school is waiting on cement to become available to finish the stadium floor.

Viesselman’s road to becoming a coach started as an athlete at Blue Earth High School, where he was the first member of the school’s cross country program, a middle-distance runner on the track and field team and a football and basketball participant, he said.

Dating back to 1975, Viesselman coached 138 individuals to the state meet in 110 events with 45 place-winners, and he said his proudest achievement was being honored as the section Coach of the Year for boys’ track in five different decades.

For the first 11 years of Viesselman’s coaching tenure, the girls’ track and field program at United South Central did not exist. It started in 1975, he said.

Aside from coaching, Viesselman taught a variety of math classes and retired 15 years ago. His favorite class to teach was sophomore geometry, he said.

After retiring as USC’s cross country coach at the end of last season, Viesselman said he’s undecided about when he will retire from track and field.