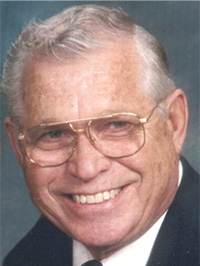 Roger was born Oct. 19, 1932, in Scarville, Iowa, the son of Thomas and Elnora (Ulve) Larson. In 1948, his family settled in Mason City, Iowa, where he graduated high school in 1951. Roger joined the Air Force in 1952 and served as a Mobile Unit Instructor in Electronics Countermeasures. He was stationed at multiple Air Force bases across the United States to provide training. Roger was honorably discharged in 1956, during the Korean War. He married Janet M. Lenz on Sept. 10, 1955, in Albert Lea. In 1956, Roger began his employment with Northwestern Bell in Albert Lea. He was transferred in 1960 to the Owatonna location and retired in 1998.

Roger was a lifelong learner. He enjoyed finding solutions to problems and repairing things. He was a member of the Telephone Pioneers where he repaired “beep balls” for the blind and electronic communications boards for the handicapped. Roger valued contributing to the community through volunteerism: he taught community fire and gun safety courses and chaperoned Boy Scout trips to the boundary waters. After his retirement, he volunteered at Heritage Halls Museum until it closed in 2001. He most recently enjoyed repairing crashed model airplanes for members of the local model airplane club. Roger looked forward to Monday morning coffee with friends and enjoyed gardening, but especially treasured his time with family.

He was preceded in death by his parents and two brothers, Laverne and Dennis Larson.

Visitation will be from 4 to 7 p.m. Monday and on 9:30 to 10:30 a.m. Tuesday at Michaelson Funeral Home. Funeral services will be held 10:30 a.m. Tuesday at Michaelson Funeral Home with The Rev. Steve Anderson officiating. Interment will be in the St. John Cemetery in Owatonna. Military honors will be conducted by the Steele County Military Funeral Unit. Memorials are preferred to Owatonna Home Care and Hospice or donor’s choice.