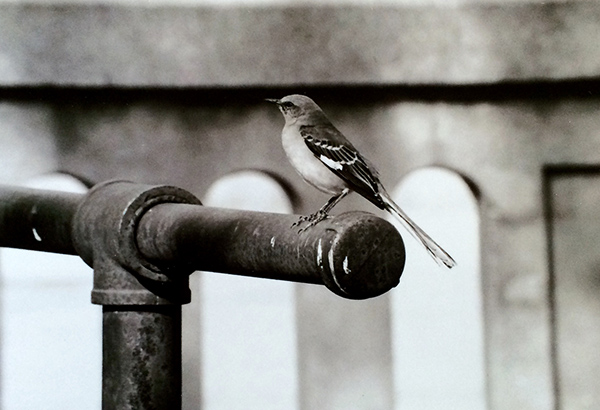 A photo of a mockingbird by Bryce Gaudian of Hayward. – Provided

“Everything is nearly copacetic. Every day is a gift, but if I had a receipt, I’d return this one. I couldn’t sleep last night. I tried counting pizza slices instead of sheep. I did finally get to sleep, but I woke up with a bad case of indigestion. I’m trying to eat more wisely today. I’m just glad that bacon can be both the main course and a dessert. My life hasn’t turned out to be what I’d hoped. I thought I’d have a hurricane named after me by now. Who invented February? I don’t mind the cold and snow, but that ice is hard to get along with. Everyone shuffles along like they are the walking dread. I’ve always wanted to be someplace warm during the winter. I’d like to follow my dreams, but I can’t spend all day in bed. Remember Crying Charlie? He used to live over at the old Hanson place. He was a reserve outfielder for the Smellvlle Skunks. He died. Junk food killed him. He got hit by a potato chip truck. I’m not worried about junk food. I’m concerned about something else getting me. I don’t want to catch any natural causes.”

They are owl over

A great-horned owl flew overhead in a whisper. The sight thrilled my eyes, but was of no more use to my ears than the silent hop of a songbird under my bird feeders. Crows followed after it. There was no whispering done by the crows. They had found the daytime roosting spot of the owl. They chased it from that location with obvious outrage and delight. The great horned owl likely had a nest nearby.

Spring is in the air and it’s not just the smell of skunk.

“I saw a opossum in my yard. Are they supposed to be here?” The Virginia opossum has been in southern Minnesota for about 100 years, but its expansion into the state’s metro and central areas is more recent.

Gyles Randall of Waseca asked why we see more vultures. Turkey vultures have been expanding their geographic range northward. The use of DDT caused widespread thinning of eggshells of many species, vultures included. After the banning of DDT in 1973, vulture populations began increasing. Other factors are the availability of road-killed animals such as deer, more landfills, reduced human persecution and climate change.

“Is nyjer really thistle seed?” Nyjer is a high-oil content seed that comes from African daisies, not thistles. It’s a favorite of goldfinches, redpolls, juncos, indigo buntings and pine siskins.

Sam Macklay of Waseca asked why we see more pelicans than in the past. The American white pelican underwent a dramatic decline in the 20th century, caused by loss of habitat, unregulated shooting, egg collecting and DDT, an insecticide that kills by acting as a nerve poison.

“What causes ruffed grouse numbers to rise and fall?” Populations fluctuate in 10-year cycles. Reasons offered include weather, tent caterpillar impact on cover and forage, predation and parasites. A study by researchers from the University of Minnesota and the Ruffed Grouse Society reported that the most supported explanation for grouse cycles was winter weather. Counts were highest during cold winters with much snow for roosting and during warm, dry winters. Counts were lowest during warm and snowy or cold and dry winters. “Ruffed” comes from the neck feathers most prominent on males. When displaying, these feathers extend and the tail fans, making him look bigger. Ruffed grouse have short lives. A study found that one out of 2200 chicks hatched lived as long as 8 years. The goshawk is an efficient grouse predator, but the great horned owl likely kills more grouse than any other predator. Grouse spend much of the winter burrowed into powdery snow, emerging once or twice a day to feed on the flower buds of aspens.

“Could bats hibernate in my attic?” Yes. Some bats migrate and others, such as the big brown bat, hibernate in caves, mines, walls, hollow trees, rock crevices, chimneys, drainage pipes and buildings. Bats are usually active as long as the evening temperatures stay above 50 degrees.

“What is the greyhound of the air?” The northern pintail.

At certain frequencies, an owl’s hearing is ten times more sensitive than ours.

Ornithologists found convincing evidence of reciprocal cooperative behavior in migrating northern bald ibises. The ibises take turns being the lead bird in a formation. Previous studies suggested that up to 35 percent of juvenile birds could die of exhaustion on their first migration. Flying in V-shaped formations saves energy. It’s estimated that geese save 10-14 percent that way.

“The power of a man’s imagination makes us infinite.” — John Muir

“The trouble with the world is that the stupid are cocksure and the intelligent full of doubt.” — Bertrand Russell