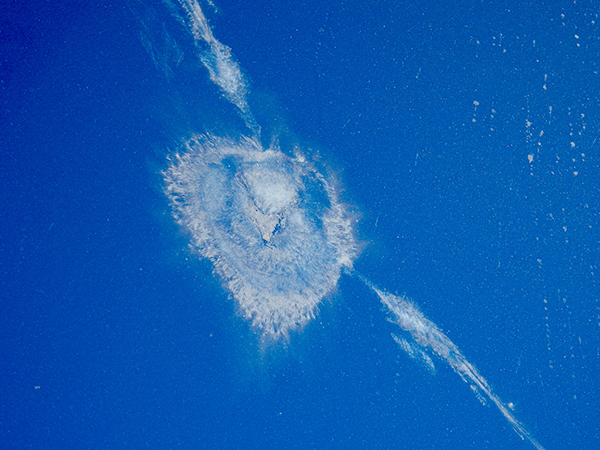 Richard Greene of New Ulm captured this photo which shows the impact image of a bird on a Minneapolis window. – Provided

“Everything is nearly copacetic. Winter is gone! One more winter day and I’d fly out of here on buzzard’s wings. I’m happy the baseball season has begun. I love the game. I remember when I used to be able to hit a ball so high that it burned out during re-entry. I should see if I could find a bat and ball in one of my cluttered closets. They’d both be covered in duct tape. I only buy things that I can fix myself with colorful duct tape. I have some of the prettiest tractors that won’t start that you’ve ever seen. Some magazine article said that Minneapolis is the most liberal city in Minnesota and Prinsburg is the most conservative. I don’t live in either one, so I guess I’m just like everyone else who doesn’t. I’m conservative when it comes to tofu and liberal when it comes to bacon. You know me. I like my eggs over easy and my bacon wrapped in bacon. That said, I’ve been eating oatmeal every other morning for most of my life. Then, one day, it dawned on me. I don’t like oatmeal. I’ve given up the stuff. Goodbye gruel world.”

The snow had left, but it’s Minnesota, so I know that it hadn’t gone far.

I watched with a horizontal humility as a northern harrier, its gray color indicating it was a male, floated low over the ground. Then it flew high into the sky, neither heaven nor earth. Its flight seemed so easy that it had to be harder than it looked.

Goldfinches fluttered about, looking like flying highlighters. A chickadee flew near and eyed me with suspicion and possibly pity because I wasn’t a chickadee. Once upon a time, I had trained a chickadee to eat from my hand. A friend commented that it must have taken a long time to train the tiny bird. I gave a flippant answer, “What’s time to a chickadee?”

Time is everything. It’s all the chickadee had.

I needed to get on the road. Nature had work to do.

I visited Avery Island, home of the world-famous Tabasco pepper sauce. It’s where salt and pepper meet. Tabasco is manufactured by the McIlhenny Company on the very site in Louisiana where it was invented in 1868 by Edmond McIlhenny. The company is owned and operated by his direct descendants. I toured the pepper sauce factory and sampled their spicy products. I’d no idea they made so many different kinds of pepper sauce. I learned about the pepper growing process, the barrel warehouse and the processing plant. Avery Island, located a few miles from the city of New Iberia, has a nature sanctuary. Edward McIlhenny (Edmond’s son) wanted future generations to have a place to enjoy and study the wonders of nature. Massive live oaks prevail at the gardens with acres of brilliant wildflowers. The Cleveland Oak, named for President Grover Cleveland, is over 300 years old. There are 600 varieties of camellias found there. The Chinese gardens contain a Buddha statue dating back hundreds of years. Alligators, deer, armadillos, raccoons, squirrels, nutrias, opossums and bobcats are wildlife that might be seen on a walk around the grounds. In 1895, when the snowy egret was being hunted for its plumage, McIlhenny built an aviary on Avery Island. He captured and raised eight wild snowy egrets. After the egrets had raised their young and were ready to migrate, McIlhenny freed them. The egrets returned the next spring and have come back every spring since then. Thousands of egrets and herons return to the rookery called Bird City, which offers a cornucopia of resident and migratory birds.

I talked to some of the employees there. The beauty of nature held them. They told me that they had no hankering for greener pastures.

“What is the longest bird migration?” Arctic terns and sooty shearwaters have both made round trips of over 30,000 miles. A bar-tailed godwit made a 7,000-mile nonstop flight. The world’s shortest migration might be that of North America’s dusky or sooty grouse that move from open breeding areas to dense conifer forests at higher elevations. This altitudinal migration is of short distance (maybe as much as 30 miles), mostly done by walking.

“Last summer I saw a giant wasp. What was it?” The female giant ichneumon wasp is up to 1 1/2 inches long, boldly patterned in brown, orange and yellow, with a 3-inch long ovipositor. She finds a larva of a horntail (also a kind of wasp) in dead or dying hardwoods to lay her eggs in. Despite her large size and menacing-looking ovipositor that she uses to drill into the wood to deliver an egg into the larva, the harmless wasp isn’t aggressive and avoids us whenever possible. No need to spray. Just ignore her.

Mallard pairs form before the spring breeding season. Pairing takes place in the fall, but courtship can be seen in winter. Only the female incubates the eggs and cares for the ducklings.

There are 300 wintering sites in California for monarch butterflies that migrate there from places west of the Rockies.

Henslow’s sparrows flit and dart. They do so reluctantly, preferring running to flying.

The first pollen collected by honey bees comes mostly from the flowers of maple trees.

Monarch butterflies hatched in Minnesota after August 15 migrate to Mexico.

“When everything seems to be going against you, remember that the airplane takes off against the wind, not with it.” — Henry Ford