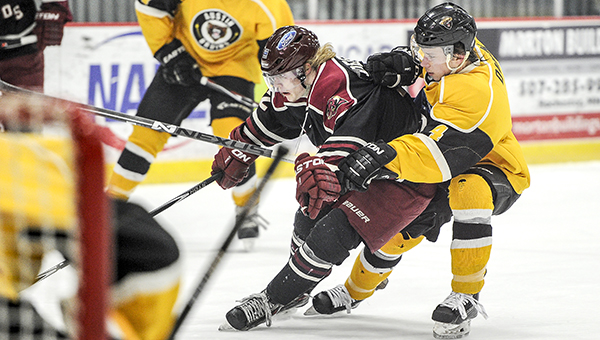 The Austin Bruins looked formidable at times but had one too many lapses as they dropped their NAHL Central Division Finals opener with a 3-2 loss Friday to the Minot Minotauros in Riverside Arena.

The Minotauros scored the first three goals of the game, but Austin pulled to within 3-2 when Josh Wilkins scored on a hesitation slap shot on a breakaway early in the third period. Austin created plenty of game-tying chances, but couldn’t score the equalizer. 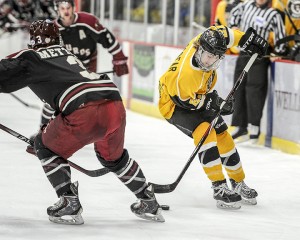 Austin’s Luke Fofar reaches back for the puck during the second period against Minot in game one of the NAHL Central Division championship series at Riverside Arena. — Eric Johnson/Albert Lea Tribune

“It’s not nerves,” said Austin coach Chris Tok. “ We just got outworked. We had guys with the puck and they didn’t want it. It wasn’t good enough. I don’t know if anybody was good enough tonight.”

Austin looked to make a move in the third period when Derek Olmschenk drilled a shot right in front of the net to make it 3-1. But the Bruins weren’t able to force any more opportunities in the last seven minutes of the third period.

“After our first goal, the puck was in our end for the next five minutes,” Tok said. “You score a goal and you think the you’ve got all of the energy and the momentum, and then the puck’s on your end, and that takes your wind out until we can going again. We’ve got to be better on a whole throughout the game and not just for spurts.”

Minot was able to use its defense to create scoring opportunities early in the game. Tok said the Bruins need to a better job of staying focused when they don’t have the puck.

“We had a lot of movie watchers early in the game and a lot of passengers, who when they didn’t have the puck they were watching,” Tok said. “If you watch for just a split second (Minot) has a couple of guys that can beat you. I thought our gap control was pretty poor.”