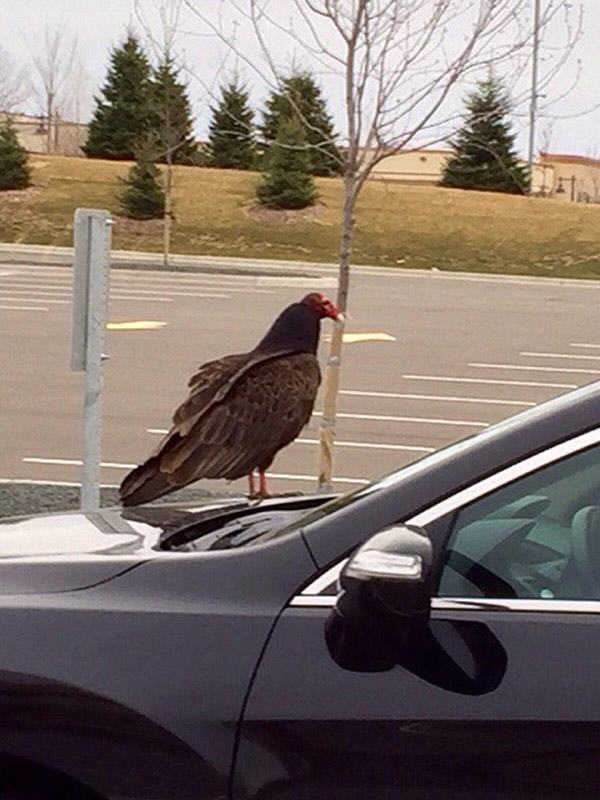 Turkey vultures may be the sanitation crew of our roadways but the vulture featured in this photo taken by Mancel Mitchell was likely nibbling on windshield wiper blades or window seals. -Provided

“Everything is nearly copacetic, but some days, I feel as if the cheese is sliding off my cracker. Like when I saw you at a track meet the other day. I didn’t think you understood anything that didn’t include a ball. I went out for track. The coach had me run one of the long races. I think it was called the 17-mile dash. At my first meet, I came in so late, I had to tiptoe past the finish line. It wasn’t my fault that I ran like a turtle in a girdle. The walk from the school bus had worn me out. My track coach taught English. He had all the personality of a hangnail. He gave me an assignment to write an essay on what I’d do if I had a million dollars. I handed in a blank sheet of paper because that’s what I’d have done if I’d had a million dollars. That’s why they’re recalling my high school diploma. I lost my job at the Fuel’s Paradise inconvenience store. I charged a guy $3,140 for $31.40 of gas.”

“Fired. I was promoted to manager.”

A bald eagle flew over. I didn’t see a live bald eagle in the wild until I was 14. Seeing a bald eagle was on my bucket list before I knew there were such things as bucket lists.

A robin fought hard to make the world his own. Tussling robins caused goldfinches to take flight, like sunshine flying away. A brown thrasher sang, a feathered troubadour. Birds take art and song to a higher place.

On the day of my sister’s funeral, a sandhill crane flew overhead. Cranes nest not far from my home and I have seen many thousands of them along the Platte River near Kearney, Nebraska, where they are so vocal, they sound like a soccer stadium after a winning goal had been scored. But the lone crane flying over meant more than any seen before. The day, my loss, the symbolism, the timeless beauty, all came together in one bird. I needed the company.

He was too busy to invent the vacuum cleaner

I visited Herbert Hoover’s boyhood home in West Branch, Iowa. Hoover was the second of three children born to a Quaker family. His father was a blacksmith and the simple cottage was 14-by-20 foot with two rooms. President Herbert Hoover wrote, “I prefer to think of Iowa as I saw it through the eyes of a ten-year-old boy. Those were eyes filled with the wonders of Iowa’s streams and woods, of the mystery of growing crops. They saw days filled with adventure and great undertakings, with participation in good and comforting things.”

Stumped by a stamp

The United States Postal Service celebrated the life and work of Maya Angelou by unveiling a stamp with her portrait and a quotation. A lovely expression. Unfortunately, the words on the stamp weren’t originally written by the poet. Children’s book author Joan Walsh Anglund wrote, “A bird doesn’t sing because it has an answer, it sings because it has a song.” Anglund’s original quote used “he” instead of “it.” It was often cited by the late poet during interviews, but Angelou never took credit for the quotation. President Obama incorrectly attributed the sentence to Angelou during the presentation of the 2013 National Medal of Arts and National Humanities Medal. It’s all good as long as the bird still sings.

Jan Wicklund of Wayzata sent along a couple of photos of a turkey vulture on the hood of an automobile that were taken by her son-in-law Mancel Mitchell. Jan was wondering what the bird was eating. I love seeing vultures, the sanitation crew of our roadways who are willing to work for food. The vulture in the photo was likely nibbling on windshield-wiper blades or window seals. Everglades Park has a problem with black vultures destroying those things. There are records from here and there of crows and jays doing the same thing. Keas in New Zealand demolish wiper blades and rubber moldings. Learned behavior, I suppose. The vultures must get something from this behavior. Perhaps they are using the cars for biting and tearing practice. Maybe it’s part of the initiation into a vulture fraternity. It might be a rite of passage, a step on the path to maturation. Maybe wiper blades are easier to find than bubblegum. As far as I’m aware, no one knows for certain why vultures do this. Vultures have also been known to gnaw away at vinyl roofs. What will be next, a tire?

“Why haven’t I ever seen a fish eat a water strider?” Water-repellant hairs on their legs allow these insects to skate on the water’s surface. Water striders eat terrestrial insects and spiders that have fallen into the water. They also eat mosquito larvae. Birds feed on water striders. Apparently, fish find water striders unappetizing and rarely eat them.

“My favorite things in life don’t cost any money. It’s really clear that the most precious resource we all have is time.” — Steve Jobs