Finding the fabled lucky four-leaf clover is a one in 10,000 chance 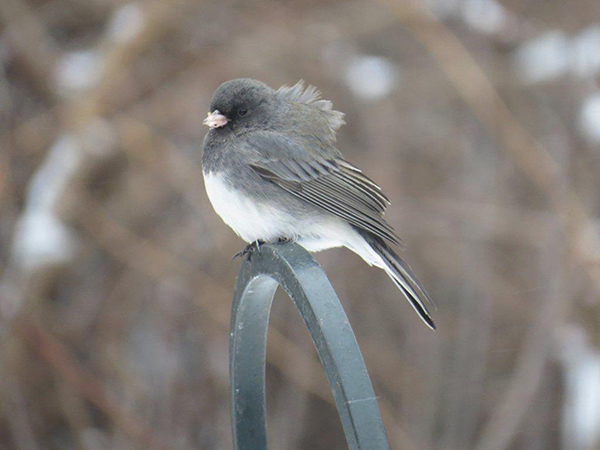 The juncos will be leaving us soon. – Al Batt/Albert Lea tribune

“Everything is nearly copacetic. I’m living the dream. I haven’t done a thing all day and I’ve been not doing it since noon. The Shingle Women are repairing my roof. Those ladies took every cent I had for the job, but I’d have been up a tree without a paddle if I hadn’t replaced some shingles. The roof leaked so much that I never could finish a bowl of soup. I figured it’d rain constantly while they worked. Pop reshingled his house during the drought. When he was hit on the head with a raindrop, two buckets of sand had to be thrown in his face to revive him. My alarm clock stopped working. It couldn’t take a licking and keep on ticking. Mark Twain said that the greatest of all inventors is named Accident. I was about to buy a new clock when I discovered that my bank account was so empty, that if I yelled into my checkbook, it took the echo eight hours to return. I don’t need an alarm clock. When I go to bed, I shout ‘Wake up!’ at my checkbook and I know that I’ll rise to my own wake-up call eight hours later.”

Our town, our nature

Robins sang a cappella in the yard. The major movement of robin migration is timed to follow the 37-degree isotherm, a line on a weather map showing where the average daily temperature is 37 degrees.

I listened to the robins. Helen Isabel Moorhouse wrote, “And I think if you listen closely in the sweet glad days of spring. With the song of the brook, the breeze, and the birds, you can hear the flowers sing.”

House sparrows chirped jauntily. These birds are much too interesting to be unvalued.

A friend retired. Now he has the time to take a cup of coffee onto his deck and listen to the cardinal’s morning song. That’s a delightful benefit of retirement that is seldom mentioned.

I spotted a pair of mallards in a road ditch. A drake has the tightly curled tail feathers, but it’s the hen that quacks.

A woman from Minnetonka told me that she had grown up in a family that had a crow. The bird pecked holes in cigarettes so that smokers couldn’t draw smoke. It was a health-conscious crow.

In “Our Town,” Thornton Wilder wrote, “Oh, earth, you’re too wonderful for anybody to realize you.”

That’s probably true, but I’m giving it a shot.

“Why do I see turkey vultures perched with their wings outspread?” It’s because you’re looking at them. I wish all questions were that easy to answer. This spread-winged stance is called the horaltic pose and it’s believed to dry the wings, warm a body and bake away bacteria. A vulture’s body temperature drops overnight. Perhaps they realize that by the time they have warmed, their ride is ready. Their ride being a thermal. The turkey vulture is one of the most skilled birds at gliding. They are able to fly with few wingbeats because they ride on thermals. Thermals are batches of rising, warm air.

“Are all caterpillars plant eaters?” No. The harvester butterfly female lays eggs in the colonies of woolly aphids, scale insects or treehoppers because the butterfly’s caterpillars are carnivorous on these insects.

“Is there a simple way to lessen the number of birds hitting my window?” Install a window feeder on the glass.

“Why is the duck called a bufflehead?” Buffleheads are small black and white ducks that nest in tree cavities from Quebec to Alaska. They are named buffleheads — “buffalo heads” — because the male’s head looks large and out of proportion to his body.

“How did nuthatches get their name?” They got the name from their habit of cramming nuts and acorns into tree bark, then pecking them with their bill to hatch out the meat from inside.

The seeds of bloodroot are collected and spread by ants through a process called myrmecochory. The ants take the seeds to their nests, eat some attached structures and discard the seeds. Bloodroot gets its name from its sap, which was used by Native Americans as body paint and dye. Bloodroot has ants in its plants.

Charles Bonaparte, nephew of Napoleon, named the Cooper’s hawk in 1828 to honor William Cooper, a naturalist known for his dedication to science.

The Canadian Geographic thinks it’s time for Canada to have a national bird. Forty species are candidates for the title and people are voting. The top contenders include Canada goose, gray jay (Canada jay), snowy owl, black-capped chickadee and the state bird of Minnesota, common loon. Our national bird, the bald eagle, isn’t on the list. The Canada warbler is, but isn’t garnering many votes.

Oology is the branch of ornithology that studies bird eggs.

“Do something wonderful, people may imitate it.”— Albert Schweitzer