Circling turkey vultures may not indicate presence of dead animal 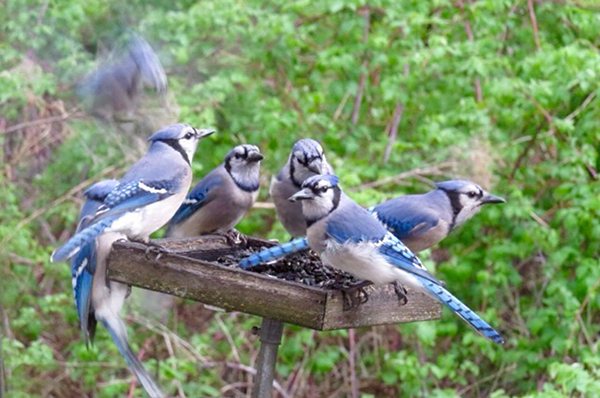 “Everything is nearly copacetic. My part-time job provides full-time stress. You know, I work well with others if they’d just leave me alone. I think my ‘Kick me’ sign is on crooked. I’m going to replace it with an ‘Out to of order’ sign and take a nap. Work allows me to live life one disappointment at a time. I didn’t win the lottery once again. I might have to give in and buy a ticket. The sandwich of my life is baloney. Still, the only things I won’t eat for breakfast are lunch and dinner. I went to the all-you-can-eat pork chop feed last week. I ate two chops and they wouldn’t give me a third. They said that was all I can eat. Some days, I’m not sure which end is up. That makes it difficult to sit down. I fixed two flat tires on my car. Now I’m flat broke. I tried out a new car. It was at that dealership that is a little hinky. Unfortunately, I applied the brakes during the test drive. The salesman told me, ‘If you brake it, you buy it.’”

The branch that once held a robin trembled after the bird’s departure.

A male cardinal fought with his image in a window. My wife felt that the cardinal would have been better served spending quality time with his mate rather than fighting with his reflection.

Several hummingbirds hurried past. They are tiny travelers that fascinate.

I listened to the songs of a red-eyed vireo, ovenbird, common yellowthroat, yellow warbler, Nashville warbler and Tennessee warbler. Rose-breasted grosbeaks and Baltimore orioles sang robustly. My ear found an odd call note. It was made by a Swainson’s thrush late in the day. This bird, which some call a mosquito thrush, has some pipes. Its song is an ethereal delight. Its call, not so much, but it’s still good to hear.

“I saw turkey vultures soaring in circles. Was there something dead below them?” I read somewhere that the collective noun for vultures is “venue.” That doesn’t answer your question, but you’d probably have wondered about it sooner or later. The vultures could have been flying over a wounded Marshal Matt Dillon trying to crawl back to Dodge City and the loving arms of Miss Kitty just inside the swinging doors of the Long Branch. Circling vultures don’t necessarily indicate the presence of a dead animal. The birds may be gaining altitude for a flight or just socializing. Vultures soar on thermals of warm, rising air. This allows them to conserve energy in flight. After rising on a thermal, they glide as far as possible without flapping. I watched six turkey vultures circling on a recent afternoon. The warm and sunny day brought out the thermals that provided rides for the vultures. I could almost hear them saying amongst themselves, “Where do you want to eat?” “How about that deer on Highway 13. Deer is always good.” “We had deer yesterday.” “Then raccoon it is.”

A vulture eats a great deal of its meals on the road. Places where skunk is always the daily special. Vultures are persistent scavengers that perform a useful service by disposing of carrion that would otherwise litter the landscape. It’s a job that none of us would want.

“How good is a bald eagle’s eyesight?” An eagle’s vision is so good, it can see what you did yesterday. Growing up, I was told that if you put a bald eagle on the goalposts at one end of a football field and a newspaper on the goalposts at the other end of the football field, the eagle would be able to read the comics. It’s hard to prove that, as eagles aren’t readers. They do have the visual acuity that allows them to see four to five times farther than we can. An eagle perched atop a 10-story building is claimed to be able to use its eagle eyes to see an ant crawling on the sidewalk. Comparisons both abound and bound all over, but this gives you an idea of an eagle’s keen eyesight.

“If I run out of toilet paper while camping, what is the best thing to use, leaves or pinecones?” Well, leaves might be from a poison ivy plant. Cones are hard and sharp. Acorns would be perfect if you enjoy a challenge. If you’re wearing socks, you will always have emergency toilet paper available. The flannel-like leaves of the common mullein plant would work well. Make sure you find the leaves first before you do anything else.

“Everybody is a genius. But if you judge a fish by its ability to climb a tree, it will live its whole life believing that it is stupid.” This is credited to Albert Einstein, but there is no record of him ever saying it. It is certain that this is one of the endless things that Yogi Berra didn’t say.

“Love yourself — accept yourself — forgive yourself — and be good to yourself, because without you the rest of us are without a source of many wonderful things.” — Leo F. Buscaglia